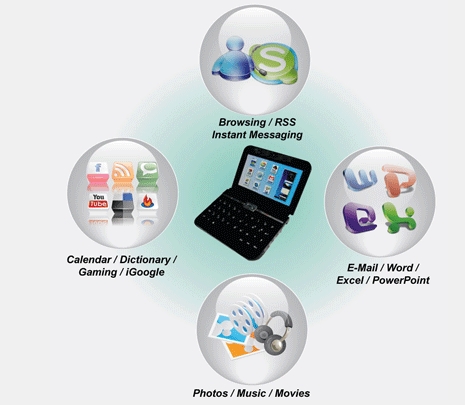 There’s been a lot of talk about ARM-based netbooks or “smartbooks” with processors from Qualcomm, Freescale, and NVIDIA. But long before Qualcomm coined the term “smartbook,” WonderMedia was using it to describe the company’s Prizm mini-laptop. WonderMedia is a subsidiary of chip-maker VIA, and the company first showed off the Prizm at CES in January. I somehow missed it, but the folks at GottaBeMobile got a chance to spend a few minutes with it.

This week VIA was showing off what looks like an updated version of the WonderMedia Prizm at Computex. Jkkmobile caught up with VIA’s Tim Brown to talk about some of the advantages of using an ARM based processor instead of VIA’s more traditional x86 chips. While ARM-based machines won’t run Windows XP, Vista, or 7, they can run Windows CE, Google Android, and a variety of Linux distributions.

The WonderMedia Prizm is currently running Windows CE with some custom applications including a YouTube browser. It uses VIA’s graphics processors to decode the video. At the same time, the smartbook has some of the same features of a smartphone, including instant on/off capabilities, and the ability to stay connected to some services even when it’s “off.”

You can check out the full video after the break.