VIA’s latest small form-factor PC is a tiny desktop computer with a 1 GHZ VIA E-Series quad-score CPU and support for Windows, Linux, or other operating systems.

The VIA ARTiGO A1250 is a follow-up to the A1200 model released earlier this year, but the new model is smaller and features a quad-core CPU instead of dual-core. 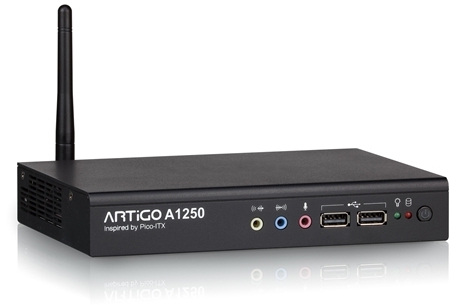 The computer features a Pico-ITX motherboard and the whole device measures just 7″ x 4.9″ x 1.2″. It has a range of ports including HDMI, 2 USB 3.0, 2 USB 2.0, mic, headphone, and line jacks as well as VGA and Gigabit Ethernet ports.

There’s a 2.5″ bay for a hard drive or solid state disk, and a single memory slot for up to 8GB of RAM.

There’s a hole that you can use to connect an antenna if you pick up the optional 802.11b/g/n WiFi accessory.

This sort of system is designed for commercial applications (think cash registers or industrial computers), but it can also be used as a home media server or a low-power desktop PC. It officially supports Windows XP, 7, Embedded 7, and XP Embedded 2009 as well as Linux. I don’t see why you wouldn’t be able to run Windows 8 on it though.