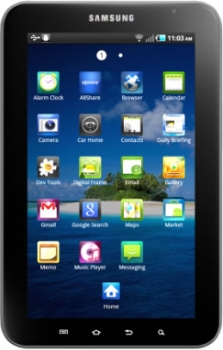 Well, it was fun while it lasted. When Samsung introduced the Galaxy Tab to decent reviews, a lot of folks were expecting it to be the first Android tablet to give the Apple iPad a run for its money. Then we started hearing about ridiculously high price tags in Europe. Not to worry, I figured. It’ll be cheaper in the US. And it is… but now that Verizon has unveiled its pricing for the Galaxy Tab, I have to wonder if it’s cheap enough.

Verizon Wireless will begin offering the Galaxy Tab 7 inch Android tablet on November 11th for $599.99. To be fair, that’s $29 cheaper than a 3G enabled iPad, but that’s hardly the point. It’s still a lot of money and Samsung doesn’t have the same kind of brand loyalty that Apple does. I suspect it’s going to be a lot harder to sell a $600 Android tablet than a $600 Apple tablet… even if the specs are comparable. In fact, if you’re looking a camera or SD card slot, or the more open Android platform, the Galaxy Tab wins. I guess we’ll find out soon whether that’s what people are looking for.

The Samsung Galaxy Tab has a 1GHz Samsung Hummingbird CPU, a 7 inch, 1024 x 600 pixel capacitive touchscreen display, 16GB of storage and a microSDHC card slot and runs Google Android 2.2 Froyo. It has two cameras, a front-facing 1.3MP camera and a rear-facing 3MP camera. The tablet has a 4,000mAh battery which should provide up to 7 hours of video playback, and it can handle 1080p HD video. It also has 3G, GPS, full access to the Android Market, support for Adobe Flash, and some custom apps including ThinkFree for editing documents and Swype for entering text.

I had kind of expected wireless carriers to subsidize the tablet the way they do with smartphones in order to make it cheaper than the iPad when you sign up for a 2 year contract. That could still happen. Unlike the iPad, the Samsung Galaxy Tab will eventually be available from all four major US wireless carriers. Right now we only know how much Verizon will be charging for it.

Verizon’s data plans for the Galaxy Tab start at $20 per month for 1GB of data.

Update: It looks like Sprint will offer the Galaxy Tab for $400 to customers who sign up for a service contract, while Best Buy will offer a WiFi-only version for $500.