Verizon’s acquisition of Yahoo closed today, which means that the company best known as a wireless carrier and TV and internet service provider is also now the proud owner of two of the internet’s biggest names (from the year 2000): AOL and Yahoo.

Now that AOL and Yahoo are under the same roof, Verizon plans to combine them to create a new subsidiary called Oath. 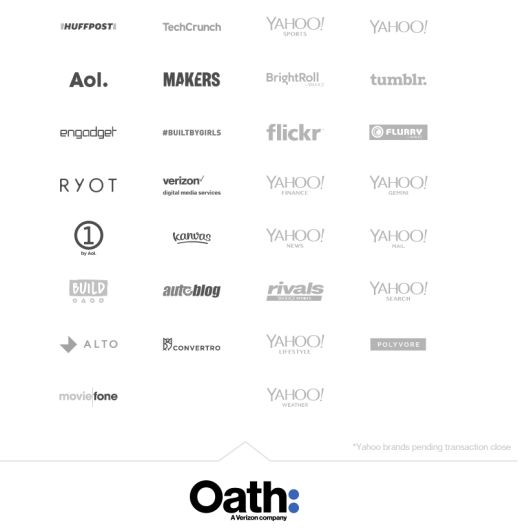 What does that mean for you? Initially, not all that much. You’ll continue to see publications like Engadget, TechCrunch, HuffPost, and Yahoo Mail continue to operate under their own names for now.

But I wouldn’t be surprised if Verizon/Oath started cross-promoting its properties pretty soon… and possibly consolidating similar services in the future in an effort to reduce costs and avoid redundancy.

Verizon also has yet to make any announcements about long-term plans for services such as Tumblr or Flickr, which it’s acquiring as part of the Yahoo deal.

Overall the move could saddle Verizon with a group of properties that have failed to stay competitive in recent years. But while the Yahoo and AOL brands aren’t as flashy as Google or Facebook these days, these earlier players in the web still attract hundreds of millions of users (and dollars) every year.

The acquisition could help give Verizon a boost in online advertising by allowing the company to collect data and target ads to those users. Whether combining AOL, Yahoo, and Verizon’s other properties will succeed here Yahoo has failed in recent years remains to be seen.

But the worst case scenario is unlikely to involve Verizon going out of business after failing to make Oath profitable. The company has plenty of resource from its other businesses that will likely help it stick around for a while. The fate of Flickr and other Yahoo-owned properties is less clear.

One thing that is clear? Yahoo CEO Marissa Mayer is stepping down and will not be involved with Oath/Yahoo/Verizon.