Motorola’s new phones for Verizon were nearly as poorly-kept secrets as the upcoming Moto X smartphone. But the manufacturer did still bring at least one surprise to today’s launch event: all three Droid smartphones will be powered by a new Motorola X8 chip. 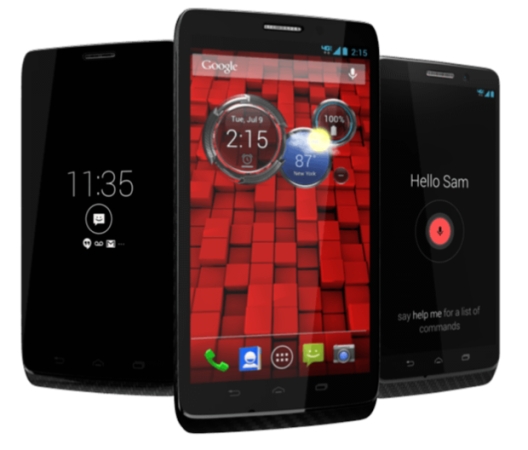 Motorola calls the new chip a Mobile Computing System, and it’s kind of an 8-core chip, or a 2-core CPU, depending on how you look at it. The processor features 2 CPU cores, 4 graphics cores, a natural language core, and a contextual computing core.

Interestingly, the CPU cores seem to be based on the Qualcomm Snapdragon S4 Pro MSM8960.

Here’s an overview of the new Motorola Droid smartphone lineup for Verizon.

Want basically the same phone, but in a thinner, cheaper package? The Droid Ultra measures 7.18mm thick, has a similar Kevlar case, and sells for $199.

It won’t get the same kind of crazy-long battery life though. This model has a 2130mAh battery. That’s better than you’ll get from some smartphones, but not exactly good enough for two full days of run time.

The cheapest member of the family is also the smallest. The $99 Droid Mini has a 4.3 inch edge-to-edge 720p HD display, a Kevlar case, and the same software you get with the larger models.

While the Droid Ultra and Droid MAXX will hit the streets August 29th, the smaller Droid Mini will ship August 29th.

There’s new software on each phone that lets you control your phone without touching it, using voice controls to make a call, ask for directions, or perform other actions — even without first unlocking your phone. You can also use gestures such as shaking the phone to wake up the phone and use the camera app.

All three phones come with 6 months of free access to Google’s All Access streaming music service. It probably wasn’t too hard for Motorola and Verizon to line up that perk, since Google owns Motorola.

But since users normally only get a 1 month free trial, customers who buy one of these phones basically get a $50 value added on for no extra cost.

Another benefit to Google and Motorola’s more-than-cozy relationship? It looks like Motoblur is virtually gone. The software is pretty much what you get with a stock version of Android straight from Google, plus a few extra apps, widgets, and optimizations.

Oh, and if you were hoping that Google would encourage Motorola to release its new phones with unlocked bootloaders, think again. All three devices will be locked. That’s not a surprise, since the same can be said of most Android devices sold by Verizon.