The Intel Compute Stick has been making headlines recently, but it’s not the only option if you’re looking for a tiny desktop computer that can run Windows.

For about the same price you can pick up a Vensmile W10 mini PC which has twice as much built-in storage, more ports, and the same processor. It also has a built-in battery which lets the computer run for a while even when the W10 isn’t connected to a display or power source. This could make it easy to move from room to room.

The Vensmile W10 is available from AliExpress for $149 plus the cost of shipping from China (and all the usual caveats that apply when ordering a device from China). 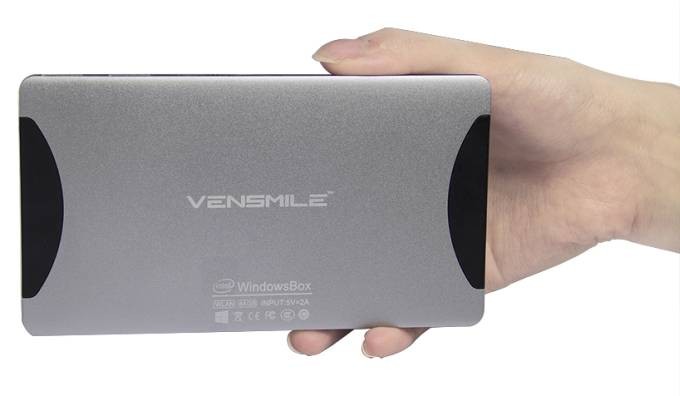 The little computer measures 5.9″ x 3.1″ x 0.39″ which makes it about the size of a large smartphone. But it doesn’t have a display and doesn’t run a mobile operating system.

There’s also a 3000 mAh battery in the case. Not only does this let you use the computer when it’s unplugged, but you can also use the W10 as a portable power bank. Just plug in your phone or tablet with a USB cable to recharge the battery of your mobile device.

The system has two full-sized USB 2.0 ports, a micro USB port (for power), a microSD card slot for removable storage, and a mini HDMI port for connecting a display. There’s also an audio jack for headphones or speakers.

This isn’t the first phone-sized Windows PC. I saw the similarly-sized Egreat i5 at CES in January, and a few companies such as Ainol already offer models with built-in batteries.

But the Vensmile W10 is notable since it’s one of the first models I’ve seen to have 64GB of storage rather than 32GB or less.

10 replies on “Vensmile W10: Tiny Windows desktop with 64GB and a battery”