Velocity Micro is getting into the tiny desktop space with the Edge Mini. But this isn’t a cheap Chinese stick with an ARM-based processor. The 1.5 inch thick computer packs an Intel Core i3 Ivy Bridge CPU.

It also carries a higher price tag than most ARM-based mini PCs. Velocity Micro plans to sell the Edge Mini for $499 and up. 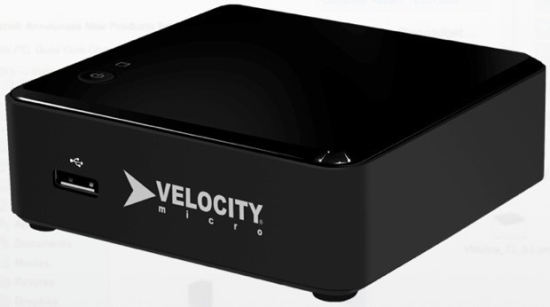 The mini-computer packs an mSATA disk and Windows software. It measures 4″ x 4″ x 1.5″ and it’s designed for use as a home theater PC, digital signage system, or as a full desktop computer.

As a full-fledged PC with an x86 processor, the Edge Mini packs a lot more power than most computers of its size. But for $499 you could get a significantly more powerful desktop PC if size isn’t a factor.

If the design looks familiar, that’s because it is. The Edge Mini looks nearly identical to the Intel NUC (Next Unit of Computing) prototype that’s been making the rounds for the past few months. It’s possible Velocity Micro is just slapping their name on Intel’s product and selling it under their own name.