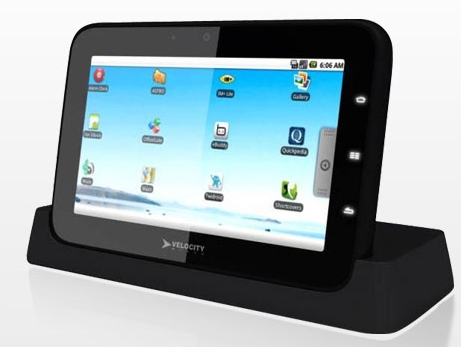 Apple may or may not eventually succeed in pushing the world toward a future where Adobe Flash isn’t the most popular format for web video and casual web-based video games like Farmville.But we don’t live in Apple’s world just yet, and while a number of companies have developed apps that will stream live video to the iPad sans Flash, a web browser without Flash still feels a bit crippled in the multimedia department. And that’s why I get a little excited every time I hear about a Google android tablet on the horizon with Flash support.

The latest is the Cruz tablet from Velocity Micro. The Cruz will reportedly be a 7 inch tablet with an 800MHz ARM-based processor. It will run Google android 2.1 and support Adobe Flash Player 10.1. Of course, by the time it’s released later this summer, Adobe Flash Player 10.1 for Android might be widely available for other tablets and smartphones as well. Bu tyou know, Velocity Micro went through the trouble of putting it in the promotional materials.

Engadget reports that the tablet will come in two flavors, one with a 16:9 aspect ratio display and another with a 4:3 screen. Each should cost around $300 or less. You can check out some hands-on photos of the tablet at Engadget.