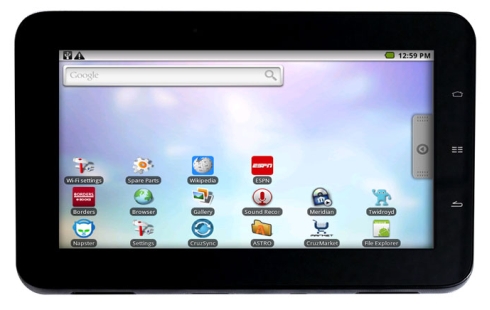 The Velocity Micro Cruz Tablet is a 7 inch Android tablet which hits most (but not all) of the sweet spots for a cheap internet tablet. First introduced a few months ago, the tablet is now shipping.

It has a 7 inch, 800 x 480 pixel capacitive toucshcreen display and runs Google Android 2.1. The tablet has 512MB of RAM, and 4GB of storage, plus an 8GB SD card for expansion. It supports 802.11b/g/n WiFi, and features an accelerometer for automatic screen rotation. There’s also a user replaceable battery.

But there are a few things the tablet doesn’t have. Probably the most important is the Android Market. You’ll need to sideload apps or download them from the custom CruzMarket app instead of Google’s larger Android Market.

It also looks like Velocity Micro decided to build three capacitive touch buttons into the side of the case for Home, Menu, and Back functions. There’s no search button. I suppose if you were going to drop one of the default Android buttons, the search button would be the first to go since not every app uses it — but I can’t quite figure out why Velocity Micro didn’t just throw in a search button for good measure.