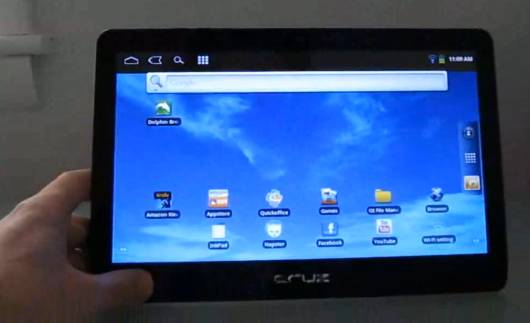 The Velocity Micro Cruz T410 is a tablet with a 10 inch, 1024 x 600 pixel capacitive touchscreen display, a 1 GHz ARM Cortex-A8 single core processor, 512MB of RAM and 4GB of storage. It runs Google Android 2.3 Gingerbread and ships with the Amazon Appstore instead of the official Google Android Market.

I posted a review of the $300 tablet earlier this week, but I hadn’t had time to shoot a video of the tablet in action, so I decided to do that this morning.

Overall, the Cruz T410 is the sort of tablet I would have loved to have gotten my hands on about a year ago. In late 2011 though, it feels overpriced for what it is. It’s reasonably fast and feels sturdy enough — even if the case has a kind of cheap plastic feel.

But the on-screen buttons get in the way of reading eBooks, the lack of the Android Market makes it a little tougher to find apps than I would like, and you’ll probably want a hefty microSD card if you plan to carry around a lot of music or movies on the tablet.

At a time when the Asus Eee Pad Transformer can be had for as little as $350, it’s tough to recommend the Cruz T410. The Asus tablet has a higher quality display, a faster processor, more storage, and the complete suite of Google apps.

On the other hand, the smaller Velocity Cruz Micro T408 offers a better value at just $200. That tablet has nearly identical specs to the Cruz T410, but it has a smaller 8 inch, 800 x 600 pixel display.