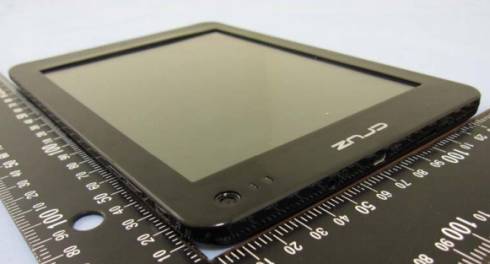 That 10 Velocity Micro Cruz T410 tablet that hit the FCC website last week isn’t available for purchase yet, but its little sibling the Cruz T408 just showed up at both the FCC website and Amazon.com, where you can pre-order the 8 inch tablet for $240

The new tablet has an 8 inch capacitive touchscreen display, 4GB of storage, and a 1 GHz Samsung Cortex-A8 processor. There’s a front-facing camera and the tablet has a 3400mAh, 12.6 Whr battery.

Velocity Micro’s latest tablet runs Google Android 2.3 Gingerbread and ships with the Amazon Appstore preloaded instead of the official Android Market. There’s no word on when the tablet will actually ship. I also haven’t seen any information about the screen resolution yet.

With the Barnes & Noble NOOK Color selling for $250, and the upcoming Amazon Kindle tablet expected to sell for about the same price, I’m not convinced the $240 price tag for the Cruz T408 makes a lot of sense, but my guess is that without an eBook store to help rake in ongoing revenue, it would be tough for Velocity Cruz or any other company to sell a tablet with these specs for much cheaper.