Valve’s Steam Deck is a handheld gaming computer with a 7 inch display, an AMD processor with RDNA 2 graphics, and built-in game controllers. First announced last summer, the Steam Deck is priced at $399 and up and Valve began taking reservations for in July 2021.

Now Valve has revealed it will begin shipping the Steam Deck to customers on February 28, 2022.

Valve had originally hoped to begin shipping the Steam Deck by the end of 2021, but global supply chain issues had something to say about that. So the company pushed back the release date by a few months and now Valve says it will begin notifying customers that their orders are ready on Friday, February 25, and folks who paid $5 to reserve one will have 72 hours to pay the rest of the purchase price for the model they reserved in order to have one shipped the following Monday, otherwise Valve will go down the reservation list and offer another person that chance to buy one.

Folks who haven’t already reserved a Steam Deck can still do that, but new reservations aren’t expected to be filled until the later this year (Valve says “after Q2, 2022, which probably means sometime in July or later).

The Steam Deck is basically a full-fledged computer, but it’s designed for gaming on the go. It’s a combination of hardware and software that sets it apart from other gaming PC including other handhelds from companies like GPD, One Netbook, and AYA. 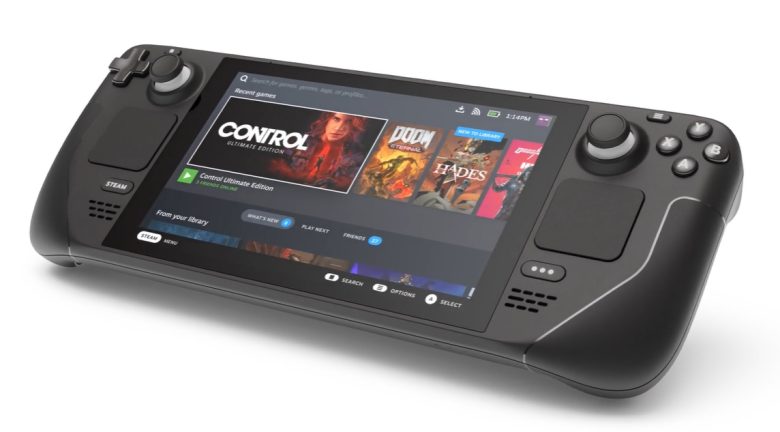 The little computer will have the most powerful graphics of any device in this category to date – even if you opt for the entry-level model which costs much less than the competition at just $399. All models have 16GB of LPDDR5 5500 MHz memory, but the entry-level version has just 64GB of eMMC storage, while higher-priced models have up to 512GB of PCIe NVMe Gen 3 solid state storage.

Valve’s game controllers include dual analog sticks with capacitive touch, the usual action buttons, D-Pad, and analog sticks and shoulder bumpers, but there are also four assignable grip buttons, two square trackpads with haptic feedback and a 6-axis gyroscope, all of which should help when playing a variety of games – even games that were designed for keyboard and mouse input rather than game controllers.

The Steam Deck also ships with a custom Linux distribution called Steam OS that puts gaming front and center thanks to a user interface optimized for small screens and controller input. And while there are still some PC games that may be Windows-only, Valve has put a lot of work into bringing support for Windows games to Linux in recent years and the company says many of the most popular games will run on Steam OS. 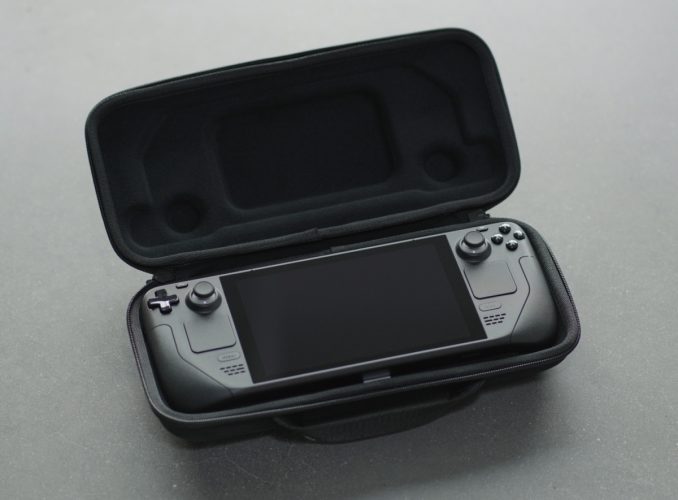 Since the Steam Deck has the guts of a general-purpose computer though, there’s nothing stopping users from installing Windows if they want to.

One advantage to sticking with Steam OS though? Valve knows that people use mobile gaming devices differently from gaming PCs and living room consoles. You might want to pick up a Steam Deck, play for a bit, and then put it away quickly without first taking time to save and exit a game and shut down. So the company has added a Dynamic Cloud Sync feature that will automatically upload your gaming data to the cloud when you suspend the Steam Deck without exiting a game.

That means you’ll be able to not only pick up where you left off the next time you turn on the Steam Deck, but your data should be synchronized to your Steam account which means you can also continue playing on another PC.

At least that’s the idea. In practice it might not work perfectly all the time – developers will need to enable support for Dynamic Cloud Sync in their games, so it’s possible that certain titles will support the feature while others will not. And I also wouldn’t expect cloud saves to work if you shut down your Steam Deck when it’s in airplane mode or someplace where you don’t have a signal.

Still, at a time when rival handheld gaming PCs are debuting with $1000+ price tags, it’s exciting to see if Valve’s Steam Deck can shake up the market.