Dell’s Venue 8 Pro is an 8 inch tablet with an Intel Atom Bay Trail processor, 32GB of storage, 2GB of RAM, and Windows 8.1 software. So while it’s about the size (and price) of an iPad mini, you can actually run full Windows desktop apps including Microsoft Office, Adobe Photoshop, and even Apple iTunes.

Under the hood, the Dell Venue 8 Pro is a lot like the Asus Transformer Book T100 I reviewed recently. So when Dell sent me a tablet to test, one of the first experiments I wanted to repeat was trying to see if I could treat the tablet like a desktop computer and get some real work done.

It worked with the Asus tablet… so what about Dell’s? 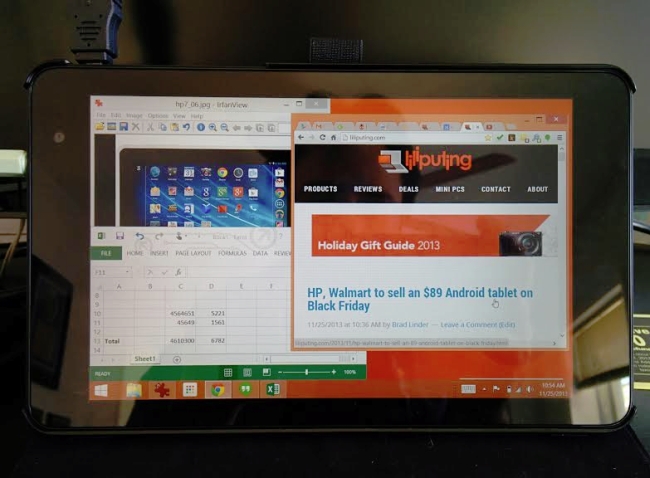 Like the Asus tablet, the Dell Venue 8 Pro has an Intel Atom quad-core processor, Intel HD graphics, and 2GB of RAM. It also comes with Office 2013 Home & Student preloaded.

But this tablet has a smaller screen than the Asus tablet, and fewer ports — which means that while it can run all the same software, the experience leaves a bit to be desired.

The Dell Venue 8 Pro has an 8 inch, 1280 x 800 pixel display, 32GB of storage, and a microSD card slot. There’s a single micro USB port, and that’s pretty much it. You don’t get an HDMI or VGA port, and there are no full-sized USB ports. And while you could certainly use the tablet with a Bluetooth keyboard, Dell doesn’t include one.

The company does offer an optional digital pen which you can use with the tablet, as well as a Folio case which doubles as a kickstand. Dell loaned me one of each for testing purposes, and you can see them in the video below.

But if you want to use the tablet as a desktop PC, you’ll run into a few challenges. First, you’ll probably need a micro USB OTG adapter if you want to plug in a keyboard, mouse, or other device with a full-sized USB connector. I happened to have one handy, so I had no problems using the tablet with a wireless keyboard and mouse combo.

Unfortunately since there’s only one micro USB port — and it’s the same one you use to charge the tablet, there’s no way to charge the Dell Venue 8 Pro and use a USB peripheral device at the same time.

Second, since there’s no separate video out port, you’ll have to resort to other methods if you want to hook up an external display. The tablet does support Miracast wireless display technology, and if you have a DisplayLink adapter you might be able to connect a monitor (or four) to the USB port.

But since I don’t have a DisplayLink or Miracast adapter handy, I had to use the tablet’s 8 inch screen. While the display looks pretty good when you’re holding the tablet in your hands and surfing the web, text, images and other graphics look awfully tiny when you stand the tablet on a desk and try to use a keyboard and mouse.

Update: Good news and bad news. The good news is that the folks at Geekbuying sent me a $30 Miracast adapter to test. The bad news is that while it does a good job of streaming video from an Android phone to a TV or monitor, it’s a lot harder to get reliable performance on the Dell Venue 8 Pro with the Miracast adapter I tested. A DisplayLink adapter seems like a better bet.

Windows lets you adjust the DPI settings to 125 percent, which helps make everything look a bit bigger, and I set the default zoom level in the Chrome browser to 125 percent for good measure. While that helped me see the screen without squinting, it also meant that I didn’t have as much usable screen real estate as I would have liked.

The good news is that I didn’t have any trouble running Chrome with more than half a dozen browser tabs open while editing images and listening to music. Microsoft Office apps load quickly, and videos from Netflix and YouTube look great.

This little tablet feels just as fast as the 10 inch Asus Transformer Book T100 — but it’s clearly not designed to be used as a desktop, or even a laptop. The smaller screen and the lack of a bundled keyboard make it more of a tablet that you’d hold in your hands and use like a Google Nexus 7 or iPad mini — and unfortunately there are still far more mobile apps for Android or iOS than there are for Windows 8.1.

But if you really want an 8 inch tablet with the power of a full PC, and the ability to run desktop apps, the Venue 8 Pro does fit the bill.

The company does offer a more powerful Windows tablet called the Dell Venue 11 Pro. It features a 10.8 inch, full HD display and a choice of an Intel Atom Bay Trail or Intel Core i3 or Core i5 Haswell chips — but prices for that tablet start at $500.