The Asus Transformer Book T100 is a Windows tablet that you can use as a notebook when you connect a keyboard dock. But why stop there?

I decided to see what happens when you plug in an external display, speakers, mouse and keyboard and try using the Transformer Book T100 as a desktop computer. The answer is you get a surprisingly capable workstation.

The only full-sized USB port is in the keyboard portion of the device, so you’ll need to dock the tablet to the keyboard if you want to plug in an external mouse, keyboard, drive, or other peripherals.

When I plugged in a 1080p display, Windows recognized it right away, and right-clicking on the desktop brought up an option to use the built-in tablet display, the external display, or both (by cloning or extending the desktop). 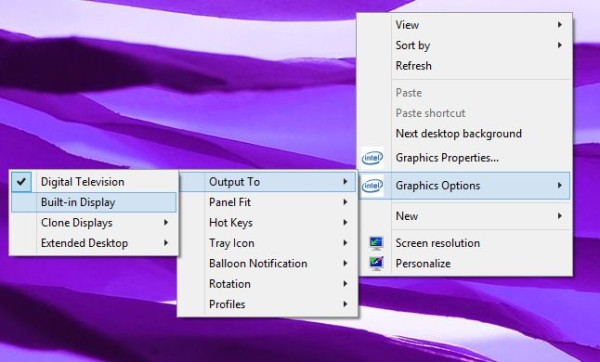 When I chose the Digital Television option, the system automatically adjusted the screen resolution to 1920 x 1080 pixels, and the computer doesn’t seem to have any difficulty pumping out graphics to the higher-resolution display.

I’ve spent most of a workday using the Transformer Book T100 as my primary work machine, with music streaming from Google Play Music while I create and edit articles for Liliputing and conduct research with more than a dozen additional browser tabs open.

Microsoft Office 2013 apps load quickly and seem to work pretty well, and I loaded the GIMP image editor to see how it performs. As on most systems, it takes a long time to load, but once it’s up and running it’s pretty smooth.

I wanted to see if I could get real work done using a tablet with a Bay Trail processor and the peripherals you’d use to turn it into a desktop-style device, and the answer is yes. But you know what they say about all work and no play… I checked to see how the machine handles 1080p HD videos, and it had no problems streaming content from YouTube.

I also fired up a game or two — and while this isn’t exactly a high-end gaming machine, it can handle simple games like Pinball and Cut the Rope, as well as older PC games like World of Warcraft.

While some folks aren’t fans of the two distinct user interfaces of Windows 8, I haven’t had any problems getting work done in desktop mode and using the Start Screen as an app launcher.

Modern-style apps that run in the touch-friendly, full-screen user interface also have a few advantages: they can run even when the display is off, for instance. So you could fire up an internet radio app and turn off the screen while music continues to play during your lunch break if you wanted. 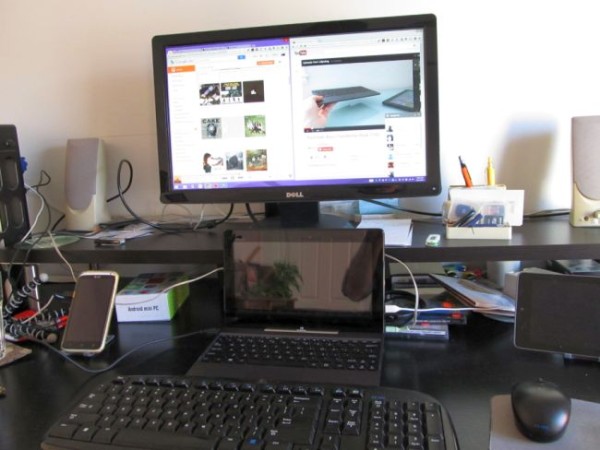 Overall I’ve been pretty impressed with how well this little tablet holds up as a work machine. I already knew it scored better than a 2011-era Intel Celeron processor in basic benchmarks, and I’ve used the Transformer Book T100 to get some work done at coffee shops over the past week. But I’m surprised just how much it feels like a regular desktop when you just hook up a keyboard, mouse, monitor, and speakers.

Don’t expect miracles from a $399 computer. Most cheap desktops you find in stores today will probably be able to run circles around the Transformer Book T100. But considering this is a portable machine that gets around 8 hours of battery life, works as a tablet or notebook, and also happens to be powerful enough for basic desktop computing certainly sets it apart from other $399 tablets on the market (I’m looking at you, iPad mini).