BOINC is a distributed computing framework that lets hundreds or thousands of devices work together like one big supercomputer. It does this by taking a large amount of data that need to be crunched and breaking it up into little chunks. Then you can download one of those chunks at a time on your computer and upload it when complete.

The platform was initially developed for the [email protected] project which analyzes radio signals in a search for extra-terrestrial life. But BOINC (Berkeley Open Infrastructure for Network Computing) is also used by dozens of other projects to do everything from solving complex math problems to making climate predictions to researching diseases.

Originally developed for desktop operating systems running Windows, Mac and Linux, BOINC clients have also been made available for other devices such as the PlayStation 3. And now you can even install a BOINC client on an Android phone or tablet. 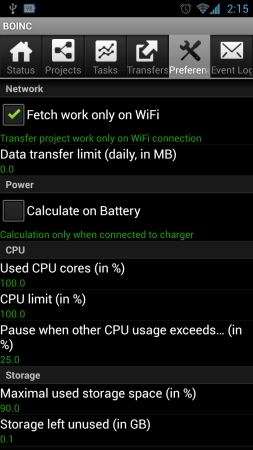 There are a few unofficial BOINC apps available for Android, including NativeBOINC and AndroBOINC.

While most Android phones and tablets have low power ARM-based processors, those chips are getting faster and faster. You’re not going to be able to crunch data as quickly on a Samsung Galaxy S III as on virtually any laptop PC released in the last few years. But the whole idea behind BOINC software is that you don’t need incredibly powerful hardware to make a contribution. All you need is a large number of devices, each doing a small bit of work.

Of course you wouldn’t want BOINC processing data in the background 24 hours a day. That’d be a good way to kill your phone’s battery in no time flat.

But most of the BOINC clients I’ve seen offer options that let you disable the software unless your device is plugged in and/or connected to a WiFi network.

In other words, your phone can help solve medical mysteries… or the mysteries of the universe while you sleep.

Given the huge number of Android devices in the wild, if even a modest fraction of users decide to install BOINC or similar software, they could have a large impact on some of these distributed computing projects.

One reply on “Use your phone to find alien life, research diseases with BOINC for Android”