The MK802 is a tiny PC-on-a-stick with an Allwinner A10 ARM Cortex-A8 processor, Mali 400 graphics, up to 1GB of RAM, and 4GB of storage. It ships with Android 4.0 software, but it can also run a number of other Linux-based operating systems including Ubuntu.

A lot of folks have expressed interest in using the MK802 as an inexpensive media center PC. It sells for around $80 or less, and handles Netflix and HD video playback reasonably well.

Now that there’s a version of the popular XBMC media center app available for Android, it’s easier than ever to use the MK802 as a media center for your big screen TV… or at least it will be once a few kinks are worked out. 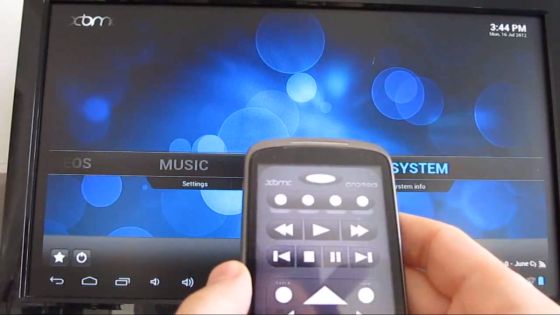 The first speedbump early testers ran into was the fact that the latest build of XBMC doesn’t support mouse or keyboard input. The second is that XBMC doesn’t yet seem to support hardware accelerated video playback on the MK802.

There’s no solution for the second problem yet — so while you can use XBMC on the MK802 for viewing photos or listening to music, video playback is painfully choppy. Hopefully some of the developers working on the open source media center will add support for hardware acceleration soon.

Update: Allwinner is promising to work with the XBMC developer community to improve hardware support for the media center software.

As for the lack of mouse and keyboard support, there’s an app for that. Since MK802 has a USB port, HDMI port, and microSDHC card slot, but no touchscreen, that made it difficult to navigate through the XBMC user interface.

But it turns out you can install the free Official XBMC Remote app from the Google Play Store on an Android phone or tablet and use it as a remote control for XBMC running on the MK802 (or any other Windows, Mac, or Linux computer in your household).

It won’t work out of the box. But you can make a couple of small changes to the XBMC app settings to get XBMC Remote working.

Note that while these instructions are aimed at MK802 users, this is basically what you’d do to configure XBMC Remote to work with any XBMC installation.

Once that’s done, you should be able to open the XBMC Remote app on your phone or tablet, hit the menu button, and choose the “Host Wizard” to connect to the MK802.

You can find your MK802’s IP address by opening the settings panel on the device, choosing WiFi, hitting the menu button, and then selecting the “advanced” option.

Now you can use your Android phone as a remote control for XBMC running on your MK802. It’s just a shame it doesn’t handle video playback very well on the cheap mini PC yet.