There are a lot of apps out there that let you take remote control of your Android device. Most require you to install another app on your device. Some of them can be a little sluggish. Other require you to root your device, which is not something everyone wants to do. 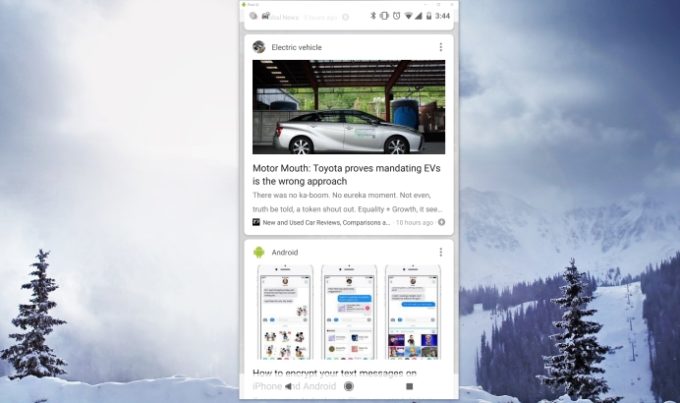 That’s not the case with Scrcpy, however. Scrcpy is free, open source software that lets you interact with your Android phone or tablet via your Windows, Mac, or Linux-based PC. I was very impressed with its performance in the brief test I put it through this afternoon. The mirrored version of my Pixel XL’s display on my Windows 10 desktop was every bit as responsive as the phone itself.

Scrcpy works via a USB connection. It creates an adb tunnel from the host PC to your device, so you do need to enable developed mode and flick the USB debugging switch in order to use it. There’s no app to install, and root access is not required.

Update: It’s also now possible to use Scrcpy wirelessly if your phone and PC are connected to the same WiFi network.

When you fire it up, Scrcpy opens an h.264-encoded stream of your device’s display to your PC. Mouse and keyboard input gets tracked by the client app and transmitted back to the Android device.

On my HP Elitedesk’s USB ports, typing, clicks, and swipes registered almost as quickly as if I’d tapped on the touchscreen. I say almost because there may have been an ever-so-slight delay. It certainly wasn’t obvious even when attempting to watch a countdown timer on both screens at the same time, however. Even video playback was smooth. Audio (which still played through the phone’s speakers) was synced up nicely.

Overall, Scrcpy a convenient way to do things like organize your files and reply to messages while you work on your PC (writing this blog post, for example). Running it on Windows couldn’t be easier, either. Just grab the .zip file from GitHub, extract it, and launch scrcpy.exe. Linux and Mac users have a few more hoops to jump through, but the process is pretty straightforward.

12 replies on “Control Your Android Device From Your PC With This Free, Open Source App”