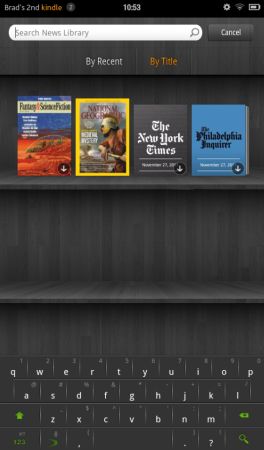 Amazon offers Kindle Fire users the opportunity to download and install thousands of third party apps from the Amazon Appstore. But there are some apps you won’t find there, including apps that require phone, camera, or microphone capabilities, because the Kindle Fire doesn’t have the hardware to support them.

But that doesn’t mean it’s impossible to use a third party keyboard instead of the official Kindle Fire keyboard. It just takes a little more work to set up than most apps.

Here’s how to do it.

While it’s possible to install some third party apps on the Kindle Fire without rooting the tablet, keyboards are special. You’re going to need certain file and folder permissions that aren’t available without rooting.

The good news is that it’s pretty easy to root the Kindle Fire. The short version is that you need to install the Android Software Developer Kit on your computer, then connect your Kindle Fire to a PC with a USB cable and run an app called SuperOneClick.

You can follow our step-by-step instructions for rooting the Kindle Fire to get started.

Before we move forward, we’ll also need to enable the installation of third party apps from sources other than the Amazon Appstore. This is even easier than rooting the tablet. 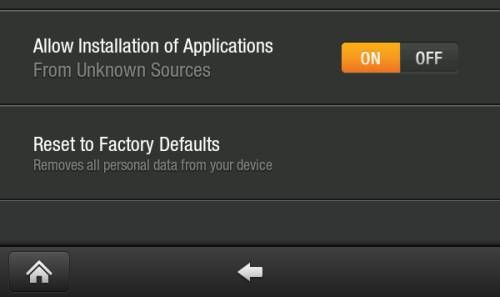 All you have to do is:

Now you can download apps from the internet and tap them from the download manager or a file browser to install them.

While you can now install third party apps on the tablet, you still need to be able to bring up a settings option that will let you decide which keyboard to use once you’ve installed a new keyboard app. Amazon doesn’t make it easy to access that menu… but there’s a free app called NookColor Tools that will do the trick.

As you might have guessed, NookColor Tools was originally developed for use on the Barnes & Noble NOOK Color — and some of the settings may break things if you try to use them on the Kindle Fire. But you can use the app to simply (and safely) switch keyboard apps. We’ll show you how in a moment. 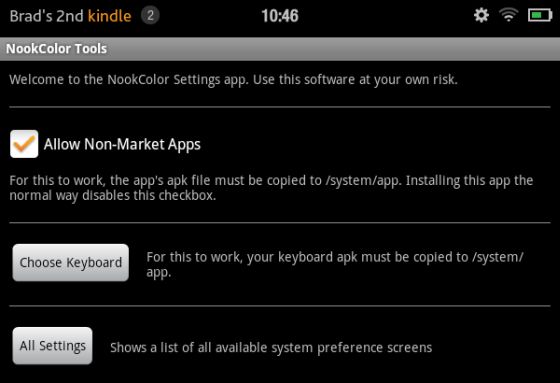 Now it’s time to install a third party keyboard app. You can search the internet for keyboard APK files using Google, the xda-developers forum, or an app store such as GetJar or SlideMe. Or you can install the Google Android Market to make it easier to access hundreds of thousands of apps including keyboard apps.

Some keyboards you might want to try include SwiftKey, Hacker’s Keyboard, SlideIT, or others. Some keyboards may not work on the Kindle Fire, but if after following then next few steps you run into problems, you can just run them in reverse to remove the keyboard.

For the rest of this tutorial, I’ll be working with the SwiftKey X keyboard trial from the Android Market.

Step 5: Move the Keyboard app to the /system/app directory

The best app for doing this is probably Root Explorer, but you may also be able to use ES File Explorer or some other file browsers.

After you’ve “installed” SwiftKey or another keyboard app in step 4, you’ll still need to take the following steps.

Press and hold the power button on your Kindle Fire until a dialog box pops up asking if you want to shut down the Kindle. Choose the Shut Down box.

Once the tablet is powered off, press the power button again until the screen turns on and wait for the Kindle Fire to boot up.

Step 7: Use NookColor Tools to select your keyboard

Now you can go to the Apps menu on your Kindle Fire and tap the NookColor Tools icon to load the application.

Tap the “Choose Keyboard” button, and a window will open up asking you to select your input method. Just tap the keyboard you want to use, and next time you tap on a text box such as the Kindle Fire search bar, the new keyboard should appear. 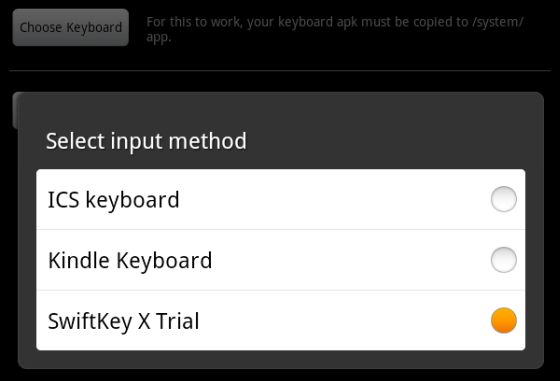 Now you can replace the standard Kindle Fire keyboard with one that features better text-prediction technology, has a more comfortable layout, or allows you to enter text by sliding your finger across the screen instead of lifting your fingers after each tap.