. It has an Intel Celeron 2955U processor, DisplayPort and HDMI, WiFi and Bluetooth, 4 USB 3.0 ports, an SD card slot, and unlike some cheap mini computers it comes with memory, storage, and an operating system.

But if 2GB of RAM and 16GB aren’t enough for your needs (or you plan to replaces the Chrome OS software with something a bit more resource-intensive), it turns out the Asus Chromebox has something else going for it: It’s easy to upgrade.

You can open the case by removing the 4 rubber feet on the bottom of the case and then removing the screws that were hidden by the feet.

After that you can gently pry open the bottom cover with a screwdriver or other thin implement (I couldn’t quite get a grip using just my fingernails). 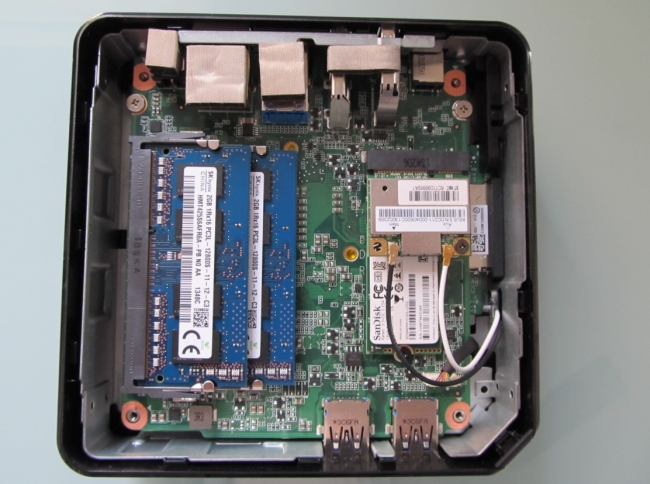 Once the cover is off you’ll see two memory slots on one side of the case. Most retail models will ship with 2GB or 4GB of storage. To upgrade the memory, just slide in an extra stick of DDR3 RAM or replace the existing storage with a higher capacity module. 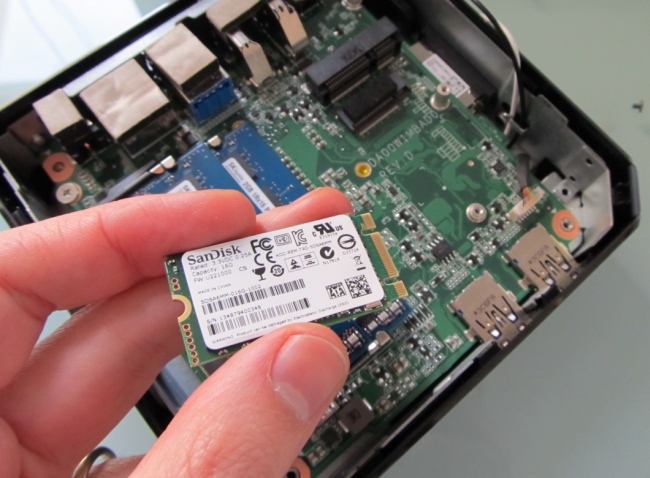 Then you can just slide out the SanDisk SSD and replace it with a higher capacity model. The Asus Chromebox uses an M.2 SATA III SSD and you can find plenty of 32GB or larger models at Amazon. Most 42mm M.2 2242 drives should just slide into the space vacated by the original SanDisk SSD.

To be honest, 16GB of storage is probably plenty if you’re planning on using the Chromebox to run Chrome OS. But if you expect to install a large number of Chrome packaged apps, store a lot of music, movies, or other files, or install Ubuntu or another operating system, it’s good to know how easy it is to upgrade.

66 replies on “How to upgrade Asus Chromebox memory and storage”