Intel’s next-gen, low-power Celeron and Pentium processors are almost here. We’d been expecting Intel’s first “Gemini Lake” processors to have shipped by now, but an updated roadmap shared by the folks at MyDrivers shows that the first Gemini Lake processors should ship this month.

The roadmap also lays out plans for new mid-range and high-end desktop chips coming in 2018. 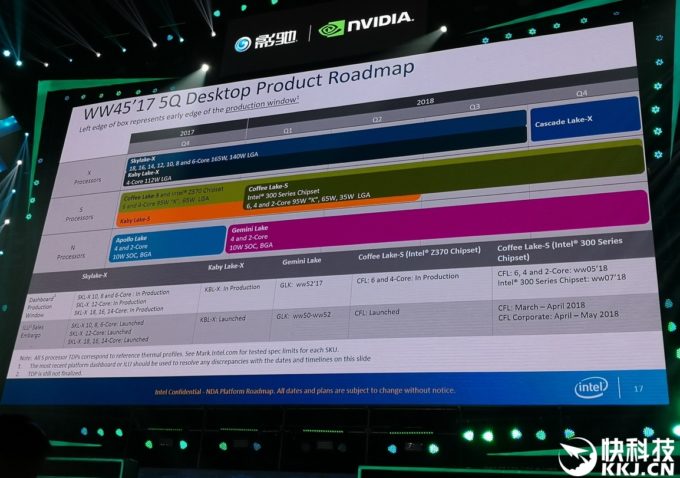 The Gemini Lake chips will come in dual-core and quad-core versions, and the processors will use up to 10 watts of power. Basically, they’re Intel’s follow-up to the current-gen Apollo Lake lineup, and they use the same architecture as Intel Atom chips of yesteryear.

In other words, these are the chips you’ll find in entry-level portable computers, mini-desktops, and other devices with low prices, low power consumption, and relatively modest specs.

Among other things, they’re expected to offer a small performance boost, native support for HDMI 2.0 and DisplayPort 1.2a, and support for LPDDR4-2400 memory. They should have twice as much cache as Apollo Lake chips and improved VP9 video decoding.

It looks like Intel will also update its Coffee Lake-S line of dual, quad, and hexa-core processors for desktops in early 2018 with the launch of a new line of chips that use the Intel 300 series chipset.

And in the fourth quarter of 2018, Intel plans to roll out Cascade Lake-X for high-end desktops. These will be the chips that eventually replace the Skylake-X chips that are currently available with up to 18 CPU cores, as well as the quad-core Kaby Lake-X.