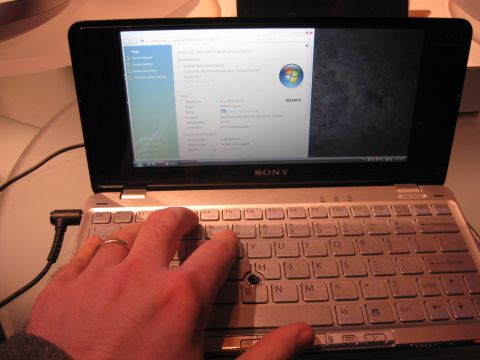 While a huge number of netbooks released over the past year are equipped with Intel Atom N270 or N280 processors and integrated GMA 950 graphics, Intel also offers another chipset that shows up in a handful of netbooks and mini-laptops. For instance, the Dell Inspiron Mini and Sony Vaio P both use Intel Atom Z520/530 processors and integrated GMA 500 graphics.

While Intel Graphics Media Accelerator 500 offers hardware video acceleration for decoding a handful of video formats including MPEG-2 and VC-1. But the truth is, most users have noticed they get better graphics and video performance with the Atom N270/GMA 950 chipset than the Atom Z5xx/GMA 500 chipset. And that’s not surprising, since the latter users less power than the former.

But Intel has released an updated driver for computers using the US15 chipset, which seems to cover machines with GMA 500 graphics. And a number of Sony Vaio P users are reporting that the update brings much better video and graphics performance. Windows Vista’s Aero interface appears to be more responsive, videos play back more smoothly, and even the web browsing experience gets a boost.

There is a minor catch. The driver only works under Windows Vista and Windows 7. There’s no support for Windows XP.

In somewhat related news, Asus has posted an updated video driver for Eee PC 1000H series netbooks that increases the amount of available video memory from 128MB to 224MB.