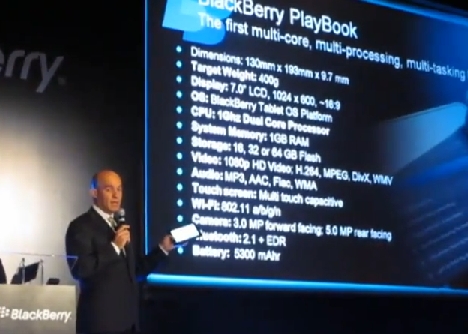 When Research in Motion introduced the BlackBerry PlayBook tablet a few weeks ago, the company mentioned it would come in 16GB and 32GB models. Now it looks like there will also be a 64GB model for users who want a little extra (or rather, double) the storage space on their 7 inch BlackBerry tablets.

The company is showing off more detailed hardware specs which list the 64GB option, as well as a bit of information about the battery. It’ll be a 5300mAh battery.

That’s not really enough information to tell us how long the tablet is going to last on a charge, but that’s the sort of thing that always depends on how you use a tablet. You’ll get significantly longer run time when listening to music than you will when using the tablet for voice and video chat, for instance. While it can handle 1080p HD video playback, that’s likely going to run down your battery. That said, most smartphones have batteries with less than 2000mAh ratings, and even many netbooks don’t have capacities that high, so there’s a good chance that the BlackBerry Playbook could give the Apple iPad a run for its money with 10+ hours of battery life under at least some conditions.

You can learn a bit more about the PlayBook in the video after the break.