Motorola’s Moto Z line of phones tend to have decent specs on their own… but what really makes them stand apart from other phones is their support for modular add-ons called Moto Mods. Right now you can buy a speaker that snaps onto the back of the phone, a 360 degree camera, a gamepad with physical buttons, or battery packs, among other things.

Soon you may also be able to add a photo printer and/or a speaker with support for Amazon’s Alexa voice assistant. 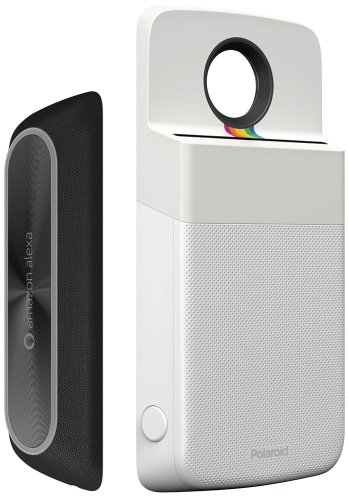 The Alexa-powered speaker makes sense, since it’s basically a better speaker than the one built into the phone, and it presumably has microphones or other features to make it easier to interact with Alexa by voice.

The Polaroid Insta-Share printer, on the other hand, is just weird. I mean, I guess it’s nice that you’d be able to print photos directly from your phone. But you can already do that buy purchasing a Polaroid ZINK printer that lets you print from an Android or iOS smartphone app.

I mean, most Moto Mods are basically custom versions of existing products. The ability to attach them to the back of the phone could make them more convenient, especially if you buy something like a battery module that you’re likely to leave connected for an extender period. Niche items like projectors and printers? I have a hard time imagining using them enough to need a Moto Mod-specific version instead of a general-purpose version that you can use with a range of devices including phones and PCs.

Anyway, I guess it’s nice that now we know what the printer and speaker look like thanks to Blass.