The makers of the UP line of single-board computers and development kits have been offering low-power systems powered by x86 processors for years.  Now the company is getting ready to launch the most powerful model to date.

The new UP Xtreme is basically a 4.7″ x 4.7″ PC motherboard with support for up to an 8th-gen, Intel Core “Whiskey Lake” processor, up to 16GB of onboard DDR4 memory, and up to 128GB of eMMC storage.

It should be able to support Windows 10, Linux, or Android, among other operating systems. There’s no word on the price or release date, but odds are that this won’t just be the most powerful UP board to date, but also the most expensive. 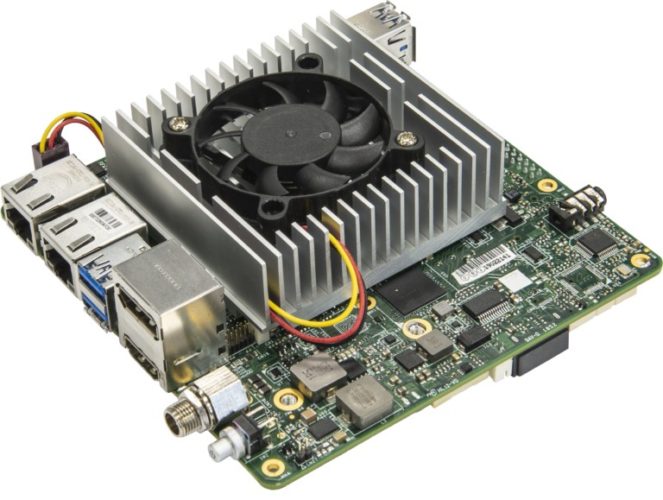 The company’s first UP Board was released in 2015 and it was a Raspberry Pi-like device with an Intel Atom x5-Z8300 Cherry Trail processor and a $100 price tag.

In 2016 the company followed that up with a similarly-priced model sporting a more powerful Intel Apollo Lake processor and a new design. And now the company sells a number of small, low-power computers and accessories in through its online shop.

Up until now, though, the most powerful of the bunch have sported chips with 10 watt or lower TDP ratings. The UP Xtreme is the first to feature 15 watt processor options including the kind of Core i3, Core i5, and Core i7 chips you’d likely find in a current-gen thin and light laptop.

But the UP Xtreme is more like a desktop motherboard. It’s small enough to fit into an Intel NUC-like chassis, and while the processor, memory, and storage are soldered to the mainboard, there are plenty of expansion options.

As the pictures indicate, there’s also support for a CPU fan.