The Raspberry may be the most popular credit card-sized, low-power, single-board computer, but over the past few years we’ve seen plenty of imitators including the Orange Pi, Lemon Pi, ODROID family, and many others.

Now there’s a Kickstarter campaign to build one of the first models to features an Intel Atom x5-Z8300 Cherry Trail processor as well as Raspberry Pi-compatible headers.

It’s called the UP, and if the developers can raise about $57,000 for the project they hope to deliver the first units in February, 2016. Backers who opt for an “Innovators Kit” could get an early version of the hardware as soon as December. 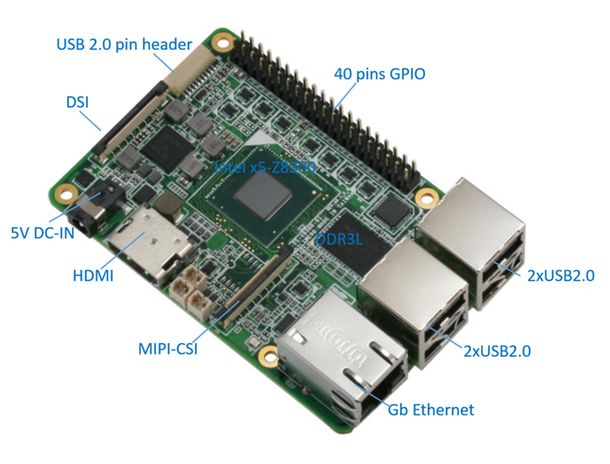 UP is more expensive than  Raspberry Pi. You’ll need to pledge at least €89 ($102) to reserve a unit. But the system is also a lot more powerful than most devices in this category: it has a quad-core Intel x86 processor, 1GB of RAM, and 16GB of eMMC storage. In addition to support Linux and Android, the system should be able to run the full desktop version of Windows 10.

You can pledge more money to get a model that comes with a power supply and USB WiFi adapter. Higher-priced pledge levels also come with kits that will let you add a 7 or 10 inch display, or use the UP to power smart home solutions.

The UP team currently has a working prototype of the hardware, and is working to finalize the software that will be available for the system at launch. You can find out more about the project at the UP Kickstarter page.

via CNX Software and /r/Linux_Devices