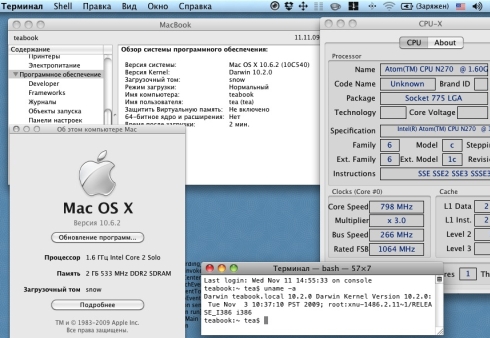 When Apple released OS X 10.6.2 last week, the company offer Mac users a number of bug fixes and security updates. Apple also broke support for Intel Atom processors. It’s not clear whether this was intentional or just a side effect of the fact that Apple doesn’t currently have any devices that use the CPU and therefore no reason to test the chipset’s compatibility with OS updates. What is clear is that netbook users that were running OS X on so-called hackintoshes found that upgrading to OS X 10.6.2 basically caused their computers to go into an endless reboot loop.

The easiest way around this was to simply not update to OS X 10.6.2. Some users also figured out how to roll back to an earlier version of the OS X kernel, keeping some of the benefits of OS X 10.6.2 without destroying Atom support.

Bear in mind, this trick is not supported by Apple or your PC manufacturer. So you have nobody to blame if you brick your system. But the same is pretty much true for installing OS X on an Intel Atom powered netbook in the first place, so if you’re still reading this you probably didn’t need my warning.

via TUAW and Insanely Mac