A day after Google released Android 4.4 KitKat and launched the Nexus 5 smartphone, independent developers have started working with both.

It’s now possible for anyone to root a Nexus 5 phone, and custom ROMs based on Android 4.4 KitKat have started to arrive for older phones and tablets. 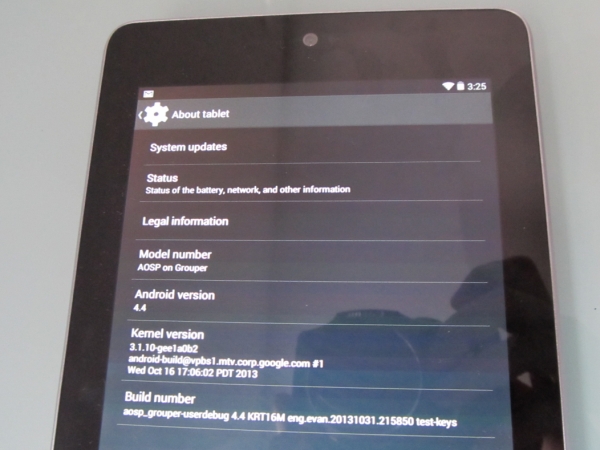 It’s always easy to unlock the bootloader on Nexus device — you don’t actually need root to do that. You just have to connect your phone or tablet to a computer with the Android SDK, enter fastboot mode, and type “fastboot oem unlock” into a terminal window.

Gaining root access, on the other hand, can sometimes be tricky. Fortunately that’s not the case with the Nexus 5. Developer Chainfire says you can use the CF Auto-Root utility for Windows, Linux, or OS X computers to root LG and Google’s smartphone just by typing a line or two of text.

The Nexus 5 may be the first device to ship with Android 4.4, but Google has already released the source code for the operating system. Official updates for the Nexus 4, Nexus 7, and Nexus 10 devices will be available in the coming weeks. But some folks aren’t waiting.

The developers behind the Paranoid Android custom version of Android have already released builds of Android 4.4 that’ll run on the 2012 and 2013 Google Nexus 7 tablets (code-named “Grouper” and “Flo,” respectively), and the Google Nexus 4 “Mako” smartphone.

These builds of KitKat are based on the Android Open Source Project code and don’t include any custom features that you’d normally associate with Paranoid Android. The ROMs don’t include key apps such as Google’s Gmail, Maps, and Play Store apps — but you can download and install them separately. All you need is a supported Nexus device with an unlocked bootloader and a custom recovery.

It’s possible some features may not work yet in these unofficial builds. Some users have had problems with GPS, for instance.

Update: There are also now unofficial builds of Android 4.4 KitKat for the Samsung Galaxy Nexus.

We should start seeing builds of Android 4.4 for other, non-Nexus devices soon — and eventually the developers of popular custom ROMs such as Paranoid Android, AOKP, and CyanogenMod will likely release new builds of their own software based on Google’s new version of Android.