As promised, Adobe has effectively pulled Adobe Flash Player 11 from the Google Play Store. If you already have the app installed on your device, you’ll be able to download security updates as they become available, but Adobe isn’t making it easy to download the app on new devices.

But Paul O’Brien is. 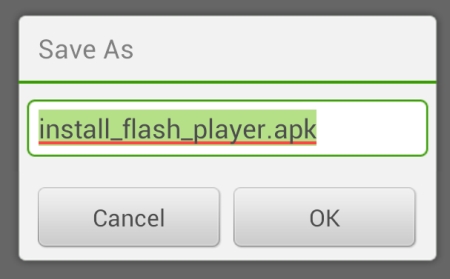 The founder of MoDaCo has released a free app called Flash Downloader.

Update: Google has removed Flash Downloader from the Play Store, but O’Brien continues to make it available from his site.

All the app does is download the latest version of Flash Player for Android directly from Adobe’s servers. Once the app is downloaded, you can install it manually on most Android devices, as long as you’ve enabled installation of apps from “unknown sources.”

Flash Player should run on most devices running Android 2.3 through Android 4.0 — but Adobe has never officially offered support for Android 4.1 Jelly Bean. So if you’re running Google’s latest software, there’s no guarantee you’ll be able to view websites with Flash content even if you try using Flash Downloader to obtain Flash Player.

Fortunately, over the past few years we’ve seen a lot of websites that rely on Flash move to HTML5 and other web technologies to support mobile devices that don’t use Adobe’s plugin. But if you still see Flash as a must-have for an Android device, and haven’t installed it yet, O’Brien’s plugin will let you do that… unless Adobe sends a cease & desist or hides the location of the Flash plugin on its servers.