Barnes & Noble has pretty much tossed aside the NOOK Tablet in order to push the newer NOOK HD and NOOK HD+ tablets. But the tablet the company released in 2011 is still a pretty capable little device with a 7 inch, 1024 x 600 pixel IPS display, a 1 GHz TI OMAP 4 dual core processor, and up to 1GB of RAM and 16GB of storage.

You can also pick them up pretty cheap if you keep an eye out for deals on used or refurbished models.

And if you’re not happy with the Barnes & Noble software for the NOOK Tablet (which is based on Android 2.3), you can install a range of other custom ROMs on device. The latest is an unofficial build of CyanogenMod 10.1 which brings Android 4.2 Jelly Bean to the NOOK Tablet. 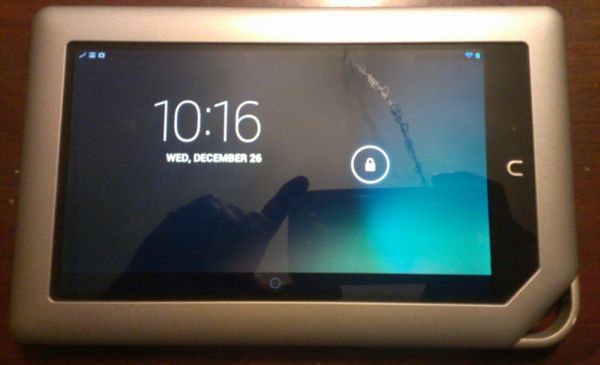 Developer Kuzma30 has been working to port the popular custom version of Android to the NOOK Tablet, and as of late December, many of the most important features are working.

Unfortunately there are still a few kinks to work out. The microphone doesn’t work yet, and video can be a bit finicky. The first time I tried to run the YouTube and Netflix apps, they froze, but after rebooting the tablet I was able to get them both to work — but the audio and video were a bit out of sync in Netflix.

Still, if you plan to use the NOOK Tablet to surf the web, listen to music, or read books, CyanogenMod 10.1 for the tablet is already in pretty good shape.

In order to install CM10.1 you’ll need to install a custom recovery such as ClockworkMod or TWRP. You can find instructions for doing that in a post by lavero.burgos at the xda-developers forum.

You can use the recovery utility to backup your device and then install the latest version of CyanogenMod 10.1.

2 replies on “Unofficial CyanogenMod 10.1 (Android 4.2) build for the NOOK Tablet”