Google may not be releasing Android 7.0 for older Nexus phones and tablets, but that hasn’t stopped independent developers from doing it. Xda-developers forum member Santhosh M has released an early build of Android 7.0 Nougat for the Google Nexus 5, one of the phones Google is leaving behind.

I suspect this is just the first of many unofficial builds of Android N for hardware that doesn’t officially support the operating system. That’s what happens when you combine an open source operating system, devices with unlockable bootloaders, and a tech savvy community of users.

Update: Unsurprisingly, other developers are joining in the fun. There’s already an early build of CyanogenMod 14 based on Android 7.0 for the Nexus 5. 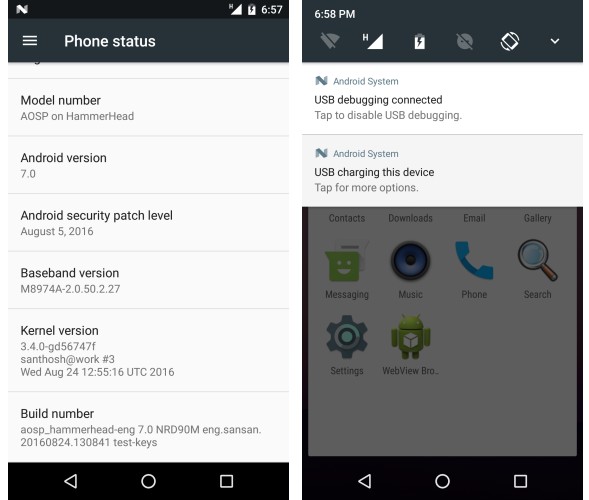 As of August 24th, Santhosh M’s port of Android 7.0 for the Nexus 5 is still very much a work in progress. While WiFi, telephony, and audio are all working, there are many features that aren’t, including Bluetooth and the camera.

In other words, you’ll probably want to backup your device before installing the software… or wait until further progress has been made. You can also check out the source code at github.

Nougat brings a number of new features to Android devices, including support for multi-window mode, notification direct replays, and a more customizable quick settings panel. But like most new versions of Android, the update will likely only be made available for select phones released in the last two years or so.

There are some indications that Google is even dropping support for some older chipsets such as the Qualcomm Snapdragon 800 and 801 processors that power phones like the Nexus 5 and Sony Xperia Z3. But developers like Santhosh M have made a habit of keeping old hardware alive by porting newer versions of Android to devices that have been abandoned by their manufacturers.

It’s probably only a matter of time before someone gets Android 7.0 up and running on the 2011 HP TouchPad tablet or 2009 HTC HD2 smartphone.