A mystery Lenovo tablet showed up at the FCC website this week. While the documents don’t tell us much about the device, other than the fact that it supports 802.11n WiFi, a few tiny photos show a device that looks like a Windows tablet with a few USB ports, docking connectors on the bottom, and some other identified ports.

In other words, we could be looking at the upcoming Lenovo IdeaTab Lynx or ThinkPad Helix. 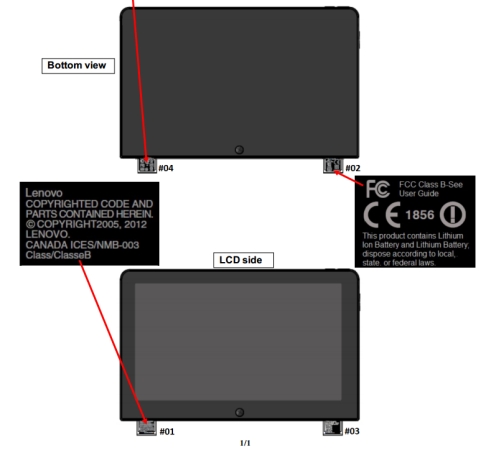 Both of those are expected to be Windows 8 tablet which can be used in laptop mode when you connect a detachable keyboard.

My money would be on the Lynx, since the photos show a tablet with almost sharp corners — which is pretty much what the Lynx looks like in promo shots. The Helix appears to have edges that are a bit more curved.

Lenovo hasn’t officially announced the Helix yet, but it’s expected to have an 11.6 inch, 1920 x 1080 pixel display and an Intel Ivy Bridge processor. I suspect it’ll also have a much higher price tag.