Google is selling smartphones again. The company opened up a Devices section in the Google Play Store. Right now the only device available is the Samsung Galaxy Nexus smartphone, but you’ll notice that “devices” is plural… suggesting that additional phones or tablets could follow. 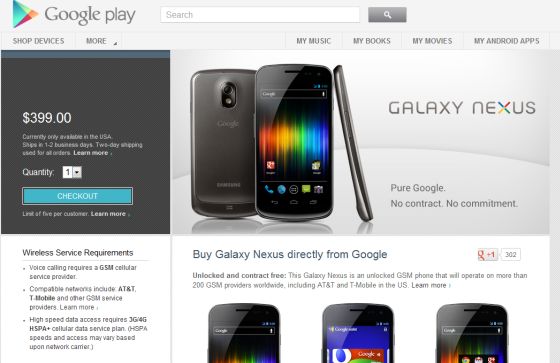 The one device that is available for purchase is a pretty good deal.

Google is offering an unlocked Galaxy Nexus to US customers. It can be used on AT&T or T-Mobile networks and supports 3G and 4G HSPA+ mobile broadband.

The phone is selling for $399, which makes it more than $100 cheaper than the last phone Google tried to sell directly to consumers. The Google Nexus One was briefly sold exclusively through Google back in 2010, but the company pulled that plug on that program after just a few months.

This is the best price I’ve ever seen on an unlocked Galaxy Nexus, and while the up-front price might seem a bit steep, T-Mobile offers cheaper service plans to customers that bring their own phones, so over the course of a 2-year contract you might be able to spend less money than you would if you bought a “subsidized” handset.