The company is giving developers ways to create apps that will run across all Windows devices using Windows Runtime and tools including C, C++, C#, .NET, HTML and JavaScript.

Developers will be able to create apps that work the same across all devices, or which offer a different look and feel depending on the device you’re using.

Update: Microsoft says universal apps will also be able to run on TVs using an Xbox One game console… eventually. 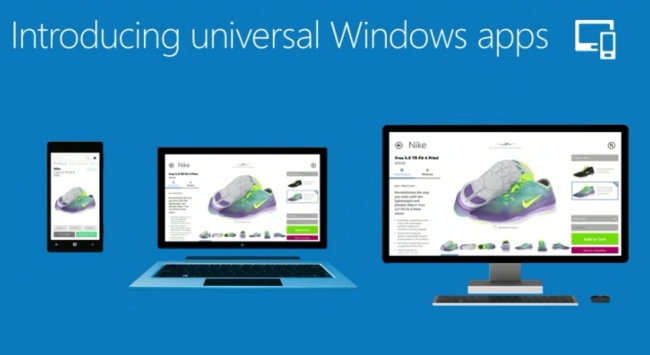 For example, a news app could have a single-column layout on a smartphone and a multi-column view on desktop, tablet, or notebook systems.

Does this mean we’re going to see games like Crysis running on smartphones now that Microsoft supports “universal” apps? Probably not. It’s up to developers to take advantage of Microsoft’s tools to create apps that can run across platforms… and they’ll still be limited by CPU and GPU speeds, as well as screen size and other hardware limitations.

Not every Windows app is likely to be a universal app anytime soon. But with Universal Windows apps, Microsoft is continuing to blur the lines between developing for phones and developing for desktop platforms.

Developers will be able to sell universal Windows apps in the Windows Store allowing customers to pay once and get apps that they can run on their phones, tablets, and other devices.