Two years after launching a BlackBerry clone called the Unihertz Titan, the folks at Unihertz are back with a new model sporting a faster processor, newer software and a much smaller design.

The Unihertz Titan Pocket is a smartphone with a 3.1 inch square display positioned above a QWERTY keyboard. It’s available for pre-order for about $221 and up through a Kickstarter crowdfunding campaign, and the phone should begin shipping to backers in September, 2021. 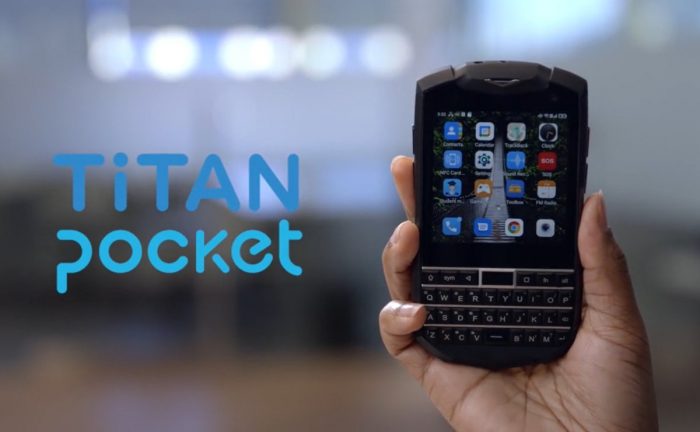 The Titan Pocket features a MediaTek Helio P70 octa-core processor, 6GB of RAM, 128GB of UFS 2.1 storage, and a 3.1 inch, 716 x 720 pixel display. It has an aluminum alloy back cover and Unihertz says it’s a tough, drop-resistant device. But it is not waterproof.

Its most distinctive feature is certainly the BlackBerry-style keyboard, which features physical letter keys as well as Android function keys as well as support for custom keyboard shortcuts. You can also use the keyboard area as a trackpad – slide your finger up or down over the keys to scroll up or down.

The Titan Pocket also has a 4,000 mAh battery, a single 16MP rear camera, and an 8MP fixed focus front camera. Other features include a fingerprint sensor, a USB Type-C port, 4G LTE, WiFi 5, and Bluetooth 4.1 support, NFC, GPS, FM Radio, and dal SIM card slots. It is expected to ship with Android 11 software.

The smartphone measures just 132.5mm x 73.2mm x 16.8mm which makes it a short but thick smartphone by modern standards. It weighs 216 grams. It also has a few features that you won’t find on most recent flagship phones including a microSD card reader, 3.5mm headset jack, and an infrared port.

While there’s always some risk involved with crowdfunding, this is the sixth such campaign from Unihertz, and the company has managed to deliver rewards to backers of its earlier campaigns.

The company says the Titan Pocket is 30 percent smaller and lighter than the original Pocket, and it has a newer, slightly more powerful processor than its larger sibling’s MediaTek Helio P60 chip. But the original Unihertz Titan also has a larger, higher-resolution display (4.6 inches, 1432 x 1436 pixels), a bigger battery (6,000 mAh), and an IP67 water and dust resistance rating.

If you’d rather go with the older, larger model, it’s still available for purchase for $350.