Smartphone screens seem to be getting bigger every year… but Chinese company Unihertz seems to be moving in the other direction. Last year the company launched a crowdfunding campaign for Jelly, an Android phone with a 2.45 inch display and 4G support.

Now the company has introduced a new model called Atom, which has a similar display, but upgraded specs and a rugged design.

It’s expected to have a retail price of $300 later this year, but you can pre-order one for $219 during a Kickstarter campaign. The Atom is expected to ship in October. 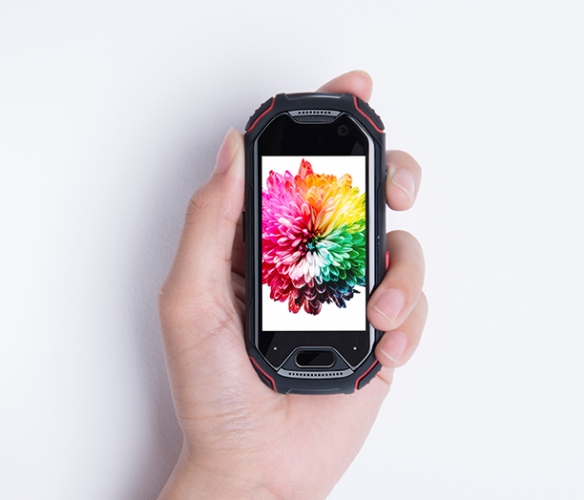 It has a fingerprint sensor, NFC, and an IP68 water and dust-resistant body. In fact, Unihertz says you can use the phone to snap photos under water. The Atom also has a rugged case to help protect it from bumps, scrapes, falls, and other shocks.

With a tiny 432 x 240 pixel touchscreen display, it’s probably not the best device for mobile gaming or multimedia. But it’s a compact phone that could be useful if you’re looking for a tough, small device that you can use to stay connected and/or listen to music or podcasts while running, for example.

Unihertz offers optional accessories including an armband, a bike mount, and a clip case.

It also has a physical shortcut button that you can program to snap a photo, open a specific app, or perform other actions without looking at the phone or interacting with the touchscreen.

The Atom has a 2,000 mAh battery and a USB Type-C port for charging. While the battery is rather tiny by modern smartphone standards, the small, low-resolution screen shouldn’t be too power hungry, so it’s not hard to imagine that the phone will get all-day battery life.

9 replies on “Unihertz Atom is a tiny, rugged 4G smartphone with a 2.45 inch display (crowdfunding)”