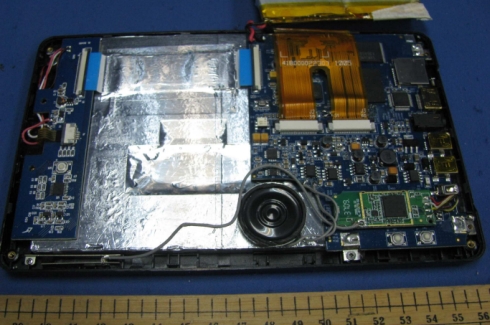 Thinking of picking up one of those $180 Sylvania Android tablets from KMart, but don’t want to pull the trigger until you know what the motherboard looks like? You’re in luck (and you have some strange purchasing habits), because the FCC has posted some teardown pictures of the device, along with a user manual and a whole slew of test reports.

The tablet has a 7 inch, 800 x 480 pixel resistive touchscreen display and a stylus (along with a compartment for storing the stylus). It runs Google Android 2.1 and has 2GB of storage space, 512MB of RAM, a microSD card slot, 802.1b/g WiFi, 2 mini USB ports, and HDMI output.

The Menu and power buttons are on the back, while there are software Back and Home buttons built into the taskbar at the top of the display. That means if you’re running an app in full screen mode, you may not be able to hit the Back button to exit!

On the bright side, the tablet support HDMI output and has an ambient light sensor, two features you won’t find on every cheap tablet. There’s a screen rotation icon in the taskbar, which is a pretty good indication that the tablet doesn’t have a G-sensor for automatic screen rotation or gaming.

You can check out some more photos of the Sylvania PID7901’s insides, outsides, and function keys after the break.