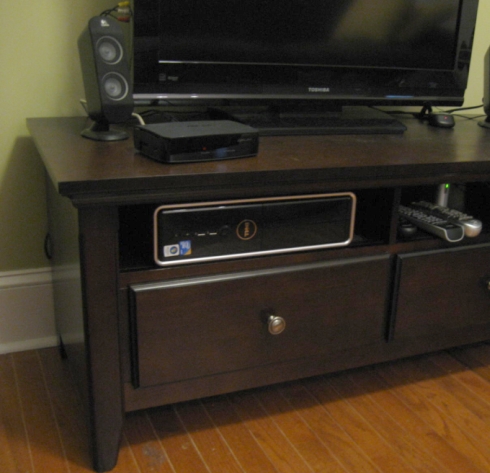 I picked up a refurbished Dell Inspiron 537s desktop computer the other day. While it’s not quite as small or low power as your typical Intel Atom powered nettop, it was certainly priced competitively at just about $350 including shipping thanks to a Dell Outlet coupon. Keep in mind, this is a refurbished model, but it has a 2.93GHz Core 2 Duo CPU, 640GB hard drive, 4GB of RAM.

The Inspiron 537s is a relatively new desktop model from Dell that measures just 4.2 inches thick. It’s 14.9 inches high and about 17 inches deep, so it’s not exactly going to compete with a Nintendo Wii or Asus Eee Top in the space-saving department. But as you can see from the image above, it fits snugly onto a shelf on our TV stand and actually looks a bit like a TiVo — which is exactly the sort of device I plan to turn it into.

The model I picked up came with Windows Vista Home Premium, but I’ll be upgrading it to Windows 7 as soon as Dell lets me into the upgrade program (It can take up to 10 days to register for the free upgrade). At that point I plan to slap an AverTV Duet dual tuner ATSC TV tuner in there. I’m also thinking about upgrading the video card, but the integrated graphics might be good enough. It can already play HD video smoothly as well as high quality Flash video from web sites such as Hulu. I have an RF remote that I purchased to use with BeyondTV several years ago and it also controls Windows Media Center and Hulu Desktop nicely.

Overall I’m pretty impressed with the little unit so far. I’ve been using a larger tower-style desktop PC as a home theater PC for the last few years. But it has a noisy fan, rather loud hard drive and an AMD Athlon X2 dual core processor that consumes more energy than the Core 2 Duo CPU in the Inspiron 537s. The new computer is cheaper, smaller, and quieter.

I had been thinking about building my own HTPC from scratch, but while the extra control you get when you do that is nice, it’s almost never cheaper than buying a preconfigured unit. The case, operating system, and CPU could easily have run almost as much as this entire computer (assuming you want to stick with Windows instead of building a Linux MythTV box).

I’ll probably post an update after I’ve installed Windows 7 and set the computer up in the living room, but for now here’s an unboxing video: