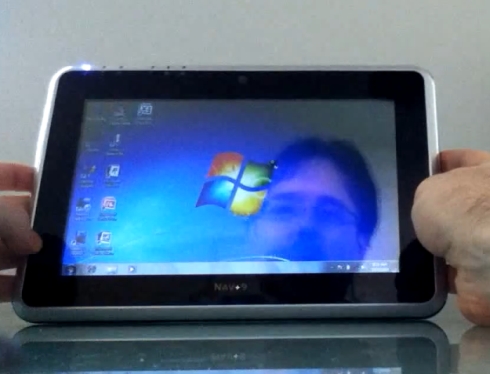 The Netbook Navigator Nav9 is a slate PC with an x86 processor, a solid state disk, and an 8.9 inch touchscreen display. It’s kind of what you would get if you took a netbook, chopped off the keyboard, stuffed all the important components behind the display, and added a touchscreen.

The folks at Netbook Navigator sent me a demo unit to review, and it’s an interesting little machine.The demo unit I received has a30GB solid state disk, 2GB of memory, and a 1.66GHz Intel Atom N280 CPU. It has integrated WiFi and Bluetooth, 3 USB ports, an SD card slot, and a SIM card slot (for the optional 3G).

The touchscreen is resistive, which means it will respond better to a fingernail or stylus than a fingertip, but it does support multitouch gestures.

The Nav9 feels a bit heavy, at 2 pounds. While that’s pretty light by netbook standards, you don’t typically hold a netbook in your hands while using it. On the other hand, that’s the exact usage scenario for a tablet or slate PC.

As Engadget’s Joanna Stern pointed out in her recent review, the screen is very glossy and the viewing angles aren’t all that good. But if you hold the Nav9 right the display is reasonably good. It actually turns out that in landscape mode you can tilt the screen left and right without losing visibility, but if you tilt it up and down the screen quickly becomes hard to see. If you switch to portrait mode, the opposite is true — you can tilt up and down, but not side to side.

There’s no accelerometer, which means you have to manually rotate the display when switching orientation. One of the first things I did was pin the icon for the Windows Mobility Center to the taskbar to make screen rotation a bit easier.

I’m not a huge fan of the Windows 7 on-screen keyboard, but I have to say I’ve had an easier time using it to enter text on the Nav9 than on any other budget touchscreen device with Windows 7… but budget might not be the best word to describe the Nav9. While prices start at $599, that’s the cost for a Nav9 without an operating system. The cheapest model with Windows 7 runs $749 for the Windows 7 Home premium version.

I’ll be testing the Nav9 more thoroughly in the coming days and I should have a detailed review soon. Overall, it looks like an interesting device for those looking for a tablet that can run Windows apps. It offers netbook-like performance in an iPad-like case. Unfortunately it’s more expensive than either of those product categories.