HP’s second Chrome OS laptop will hit the streets in about a month. It has a shiny new Intel Celeron processor based on Haswell architecture, offering improved performance and increased battery life. But like HP’s first Chromebook, the new Chromebook14 sports a 14 inch, 1366 x 768 pixel display.

If you’re looking for a more portable Chromebook, you’re probably better offer picking up a model with a smaller screen from Acer or Samsung. But it looks like HP is working on a smaller Chromebook as well.

Update: Google and HP have officially introduced the HP Chromebook 11. It’s a $280 Chrome OS laptop with an ARM Cortex-A15 processor, an 11.6 inch display, and 6 hours of battery life. 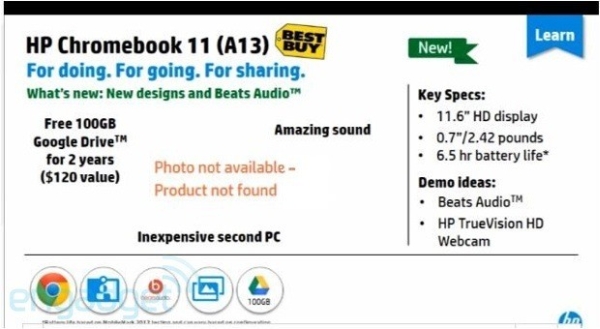 Engadget spotted an HP document mentioning an unannounced HP Chromebook 11. All that we really know about the device at this point is the name, but it’s enough to surmise that the Chromebook 11 will be a notebook running Google’s Chrome OS software with an 11 inch display — or more likely an 11.6 inch display, since that’s a much more common screen size. PC makers often just sort of round down when naming notebooks and tablets with 11.6 inch screens.

Unfortunately there’s no word on the processor, memory, storage, or other specs. While it’s likely that HP’s smaller Chromebook would have the same Celeron 2955U processor as the 14 inch model, Chrome OS can run on devices with all sorts of different chips. Models have shipped with a wide range of processors including a Samsung Exynos 5 dual-core chip, Intel Atom processors, and Intel Core i5 chips.

It’s also tempting to guess that the HP Chromebook 11 will be cheaper than a typical Windows notebook, but even that’s not a given. While some Chrome OS laptops sell for as little as $200, others sell for $1299 and up.