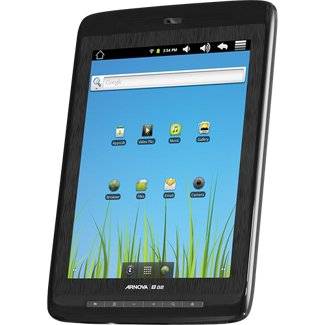 Archos recently introduced two new Android tablets for its Arnova line of budget tablets. The Arnova 7 G2 has a 7 inch display and the Arnova 10 G2 has a 10 inch screen. But it looks like there could be a new 8 inch model in the works as well.

While there’s no mention of an Arnova 8 G2 on the Arnova website, J&R has a product page for the tablet and says it will be available soon for $199.99. The Arnova 8 G2 also showed up at the FCC website a few months ago.

Like the new 7 and 10 inch Arnova tablets, the Arnova 8 G2 features a 1 GHz processor, 4GB of storage, and Google Android 2.3 Gingerbread operating system. It has an accelerometer, WiFi, and support for Adobe Flash.

The tablet has an 8 inch, 800 x 600 pixel display. Like other Arnova tablets it will probably ship with a third party app store called Appslib instead of the Android Market, but you can also install an alternate app store if you like.