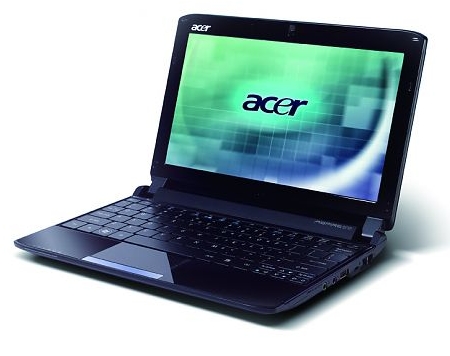 Like a number of PC makers, Acer hasn’t officially announced any new netbooks with Intel Atom Pine Trail processors yet. But the folks at Netbook News.de tracked down some pictures of an upcoming model called the Acer Aspire One 532h. It has an Atom N450 processor, GMA 3150 graphics, and a high resolution 1280 x 720 pixel 10.1 inch display.

Aside from the new chipset and higher resolution display, the netbook looks a lot like Acer’s current offerings in this space. It will have 1GB of RAM, either a 160GB or 250GB hard drive, 802.11b/g/n WiFi, and run Windows 7 Starter Edition.

Update: It looks like Acer has gone ahead and officially announced the Aspire One 532h.There’s no mention of that HD display, but that doesn’t rule it out as an optional component. The base model will sell for $299 with Windows 7 Starter and a 6 cell, 4400mAh battery. The netbook comes standard with a multitouch touchpad and 802.11b/g/n WiFi.