Chinese smartphone maker Umi is showing off a few pictures of an upcoming smartphone that seems to feature two screens: there’s a color screen on one side of the phone, but if you flip it over there’s what appears to be an E Ink screen on the other side. 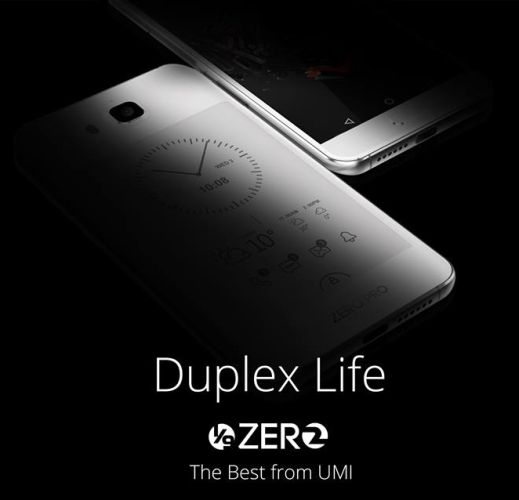 If the design of the Umi Zero 2 smartphone looks familiar, that’s because we’ve seen it before. The phone looks an awful lot like the Yotaphone 2 from Russsian phone maker Yota Devices. In fact, even the software looks the same.

I don’t know if that means Umi is working with Yota, or ripping them off. Either way, there’s a decent chance the Umi Zero 2 could be cheaper than a Yotaphone 2, which is expected to have a retail price of $600 in the US, but which is available for a little less if you back the company’s crowdfunding campaign.

Speaking of Yotaphone, there’s been a story making the rounds for the past few days that the company plans to stop using Android for its upcoming smartphones and instead use Jolla’s Sailfish operating system. I first saw this news in Russian media a few days ago, but figured that Google Translate was making it too hard to understand what was going on, so I ignored it.

Then Yahoo News picked up the story and a number of tech blogs ran with it over the weekend… and a few issued retractions. Nate at Ink, Bits, and Pixels is one of the few people I know who actually reached out to Yota for comment and received a response that the story was flat-out wrong.

While seems that Yota is testing Sailfish as an alternative to Android for use in some markets (Russian government officials haven’t been shy about saying they’d like to encourage alternatives to Windows, Android, and other operating systems developed in the West), Yota has put a lot of time and effort into developing a phone that runs on Android… and if the company expects to sell a large number of its dual-screen handsets, it’d be silly to switch entirely to a niche operating system with a tiny market share at this point.

As for the Umi Zero 2, Umi has posted photos of its upcoming phone on Facebook, Google+ and Twitter, but the company hasn’t provided detailed specs… although earlier this year specs for a phone with the same name did start to emerge. If those details were accurate, and if this is the same phone, the Umi Zero 2 might have a 5.2 inch display, a Mediatek MT6752 octa-core processor, 3GB of RAM, 16GB of storage, a 13Mp rear camera, and an 8MP front camera.

GizChina suggests the “1/9” in the image above could mean that the new phone will officially launch on September 1st. Hopefully we’ll have more details by then… including news about whether this phone will support US wireless networks.