The new USB Type-C is starting to show up in laptops, smartphones, and tablets. The connectors are reversible, which means there’s no way to accidentally insert a cable upside down.

So far most of the products we’ve seen with USB-C ports have been premium devices like the 2015 MacBook. But there technology doesn’t have to be expensive: Chinese phone maker Umi has just unveiled a new smartphone with a USB Type-C connector, and the phone will sell for just $130. 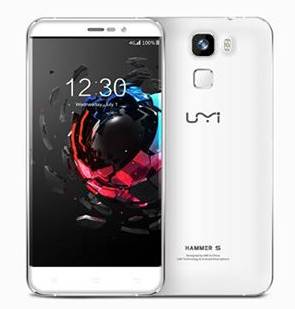 The Umi Hammer S also has another feature that’s usually only found on high-priced phones: a fingerprint sensor.

Other features include a 5.5 inch display, 2GB of RAM, 16GB of storage, and a MediaTek MT6735 processor, which is a quad-core, ARM Cortex-A53 chip with Mali-T720 graphics.

Some, but not all, devices with USB-C connectors can also deliver video output through USB, transfer enough power to charge a laptop, and generally run circles around your standard USB 2.0 device. But even if cheap devices like the Umi Hammer S get little more than the reversible charging port, they help pave the way toward a world where you don’t need cables of different sizes and shapes for everything.

Soon USB Type-C connectors won’t be enough to make a mobile device stand out. But for now, it’s still kind of novel to see a phone that will use the new technology.

The Umi Hammer S is a follow-up to last year’s Umi Hammer, which sells for around $150 and up.

While you can use the original Umi Hammer with AT&T or T-Mobile in the United States, it won’t support either company’s 4G LTE network. So mobile data speeds will be capped at 3G.