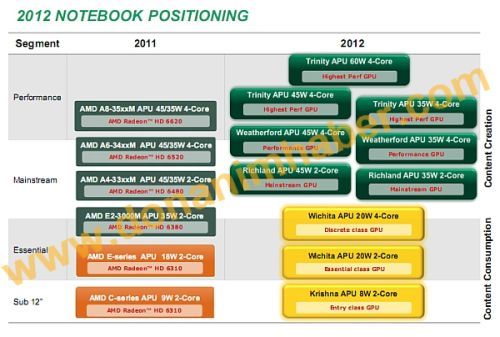 Next year chip maker AMD is expected to launch its answer to Intel’sultrabook platform. Ultrabooks are basically thin and light laptops that weigh less than 3 pounds, have starting prices under $1000 and have Intel chips. But really, they’re just thin and light laptops — which is why I’m dubious that the name will really catch on.

Because let’s face it, if a big name PC maker releases a 13 inch notebook next year that looks like a MacBook Air, but which runs Windows and has an AMD processor — most people aren’t going to be able to tell it apart from the laptops that Intel has arbitrarily decided are ultrabooks.

OK, now that my nomenclature rant is out of the way, it is pretty exciting to see chip makers focusing on powerful processors for super-thin laptop computers. There’s not a lot of room for fans and other traditional cooling mechanisms in a laptop that’s less than 0.8 inches thick, which is why in the past we’ve tended to see ultraportable laptops with low power Intel Atom processors or computers like the classic Toshiba Libretto line which were small, but thick.

According to a product roadmap that was leaked this summer, AMD’s upcoming Krishna processor will have a TDP of 9W, while the upcoming Wichita platform will run at 20W.

Digitimes reports AMD’s new chips for ultraportable laptops will start to hit the streets in the summer of 2012, replacing the current AMD C-series and E-series chips.

5 replies on “Ultrathin notebooks with AMD chips coming in 2012?”