Intel’s upcoming 4th generation Core processors are designed to offer better performance than today’s Ivy Bridge chips, but the new processors, code-named “Haswell,” will also use less power than today’s chips. That means we could see notebooks with tablet-like battery life, and maybe even fanless computers with Haswell chips.

But not only are Haswell chips expected to use less power while active than Ivy Bridge processors, they’ll be able to use far less while idle. 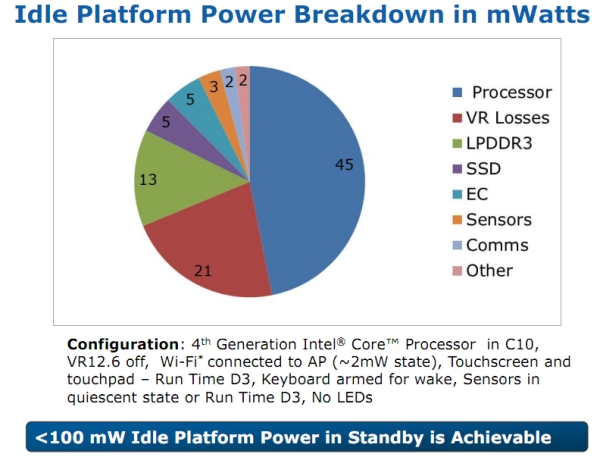 Intel says that devices with Haswell chips will be able to use as little as 100mW while idle. That’s compared with about 3W used by current chips.

In other words, you could start to see ultrabooks that idle like ARM-based tablets, using almost no power at all, while continuing to stay turned on and connected to the internet.

Intel is also advising device makers to use other components which will help reduce battery drain such as LPDDR3 memory and/or leave room in the PC case for higher capacity batteries, such as HDI (High Density Interconnect) technology.