While there are plenty of those around, there are a few things that make the UG007 different. 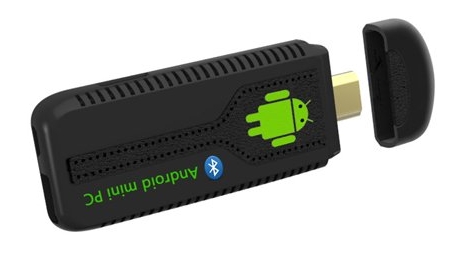 The rest of the specs are pretty much par for the couse, including Mali 400 graphics, a USB 2.0 port, HDMI output, and a microSD card slot.

You can use this sort of device by plugging the HDMI port directly into a TV or monitor, hooking up a power source, and connecting a USB or wireless mouse, keyboard or remote control. Basically, it lets you run Android apps on a TV or monitor.

The first TV sticks of this type started to hit the market earlier this year, and in the last few months we’ve seen a number of models with faster processors, more storage, and other improved specs. But Bluetooth is still relatively rare.

Reno Botes from Ugoos tipped me off about the new mini PC. You can find more details at the Ugoos website — but you’ll need to contact the distributor for pricing details. Botes says units should be ready to ship by the end of the week.

Or you could just scan through AliExpress, where a number of sellers are already offering the UG007 with prices as low as $60.

Unlike some TV stick/mini PC devices, it’s unlikely that you’ll be able to run Linux on the UG007 any time soon. Rockchip doesn’t make a habit of releasing source code that would help developers port Ubuntu or other operating systems to run on devices with the company’s chips.