Chip designers and manufacturers have widely adopted a “chiplet” strategy in recent years, basically combining a series of smaller modular bits of silicon with different functions together to create more versatile processors.

Now many of the biggest players in the semiconductor space have come together to introduce an open standard for chiplets. The new Universal Chiplet Interconnect Express (UCIe) specification that could not only make it easier to design processors that use chiplets, but also allow for interoperability of chiplets: imagine an Intel chip with Qualcomm or Samsung chiplets, or vice versa. 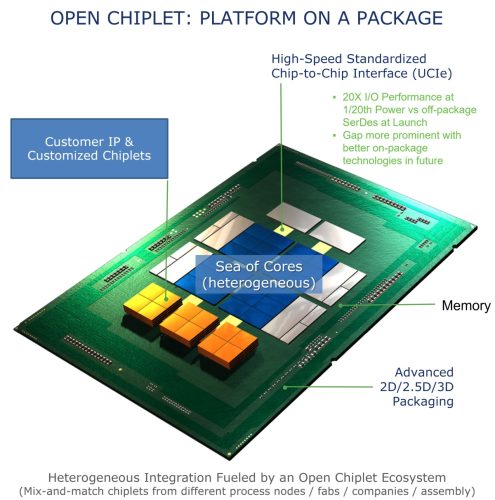 It’s not like we haven’t seen rival chip makers partner on things like this in the past. Samsung’s new Exynos 2200 processor featured AMD RDNA 2 graphics, for example (for better or worse). A few years ago Intel released a set of chips with AMD Radeon Vega graphics. And every now and again chip makers will release x86 processors with ARM or RISC-V co-processors.

But up until now that’s largely happened on an ad-hoc basis. The new UCIe specification establishes a standard platform for connecting chiplets and covers both physical aspects and software for interconnection and interoperability. As AnandTech notes, it would be similar to the way PCIe expansion cards work today: any graphics, storage, networking, or other card that supports the standard will slot into a PC with the appropriate port, regardless of who makes the PC or the card.

So it’s notable that the UCIe standard is backed by many of the biggest chip designers and manufacturers including AMD, Intel, ARM, Qualcomm, Samsung, TSMC, Microsoft, Meta, Google Cloud, and Advanced Semiconductor Engineering.

The UCIe 1.0 specification is already available upon request, and there’s a white paper explaining the reasons the standards was created and how it will work. Modeled after existing plug-and-play solutions including PCI Express and Compute Express link, the new UCIe specification also leverages technologies developed for those standards.

In addition to launching a new standard, the groups behind UCIe plan to form an industry consortium to continue supporting, developing, and promoting the new standard moving forward.