A group of independent developers have ported the Linux-based operating system to run on the Samsung Galaxy S III smartphone. 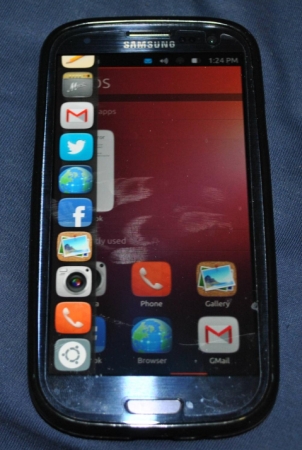 You can find the download links and instructions at the RootzWiki forum. In a nutshell you need a Galaxy S III with an unlocked bootloader and a custom recovery such as TWRP or ClockworkMod.

Then you use your recovery software to wipe your data, install the Ubuntu 12.10 Touch Preview, and reboot your device.

It’s probably a very good idea to backup your system first. And if you’re being paranoid, I’d recommend copying your backup to an external device in case you need it.

The odds are very good that you’ll want to restore your phone to Android after you’ve played around with Ubuntu a bit.

The builds by Canonical this week are very preliminary and very rough around the edges. You can get a sense of what the operating system looks like, how notifications and settings work, and how to navigate. You can also run a few apps including the web browser (which isn’t particularly speedy).

But there are no third party apps yet, and even some of the icons to apps and media that are included in the disk image are fake apps and files. Their only purpose is to show you what Ubuntu for phones and tablets will look like when it’s closer to being finished.

Update: Canonical has made it pretty easy to port Ubuntu Touch Preview to run on additional phones and tablets, and you can find a list of supported devices (as well as works in progress) at the Ubuntu Wiki.