Canonical scrapped its plans to bring Ubuntu to smartphones and tablets years ago. But the independent developers at UBPorts have been keeping the dream alive since 2017.

Now they’ve announced a release candidate of a new build of Ubuntu Touch that marks a major milestone: it’s the first version of the Linux-based operating system based on Ubuntu 20.04 LTS.

While Ubuntu 20.04 is already two years old at this point, it’s a long-term support release that will receive standard support through April, 2027 and extended security support for five more years after that.

More importantly, while UBPorts has made a number of changes to Ubuntu Touch over the years, including porting the operating system to run on a wider range of hardware, the OS has been based on Ubuntu 16.04 LTS since 2018. The move to Ubuntu 20.04 will be only the second time the base operating system has been updated since UBPorts took over development of Ubuntu Touch.

UBPorts has been rolling out test builds of Ubuntu 20.04 to supported devices signed up for the dev channel for the past few months, but now the team has announced that it’s now available through a Release Candidate channel through the UBPorts Installer. 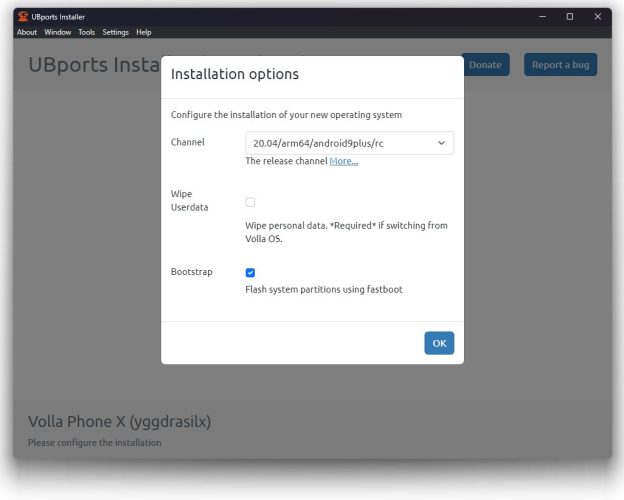 If everything goes well with the release candidate, the goal is to shift all development of Ubuntu Touch from Ubuntu 16.04 to Ubuntu 20.04 and roll out the first stable release in the coming days or weeks. But it could take a little while until the new builds are available for all of the devices that support Ubuntu Touch.

At this point only “a small number of devices” can run the latest build of the operating system, but the list will likely grow over time as more developers work to port the software to run on more of the dozens of devices that support Ubuntu Touch.