For about as long as computers have had graphical user interfaces, apps have had menus. You know those things at the top of the window that say things like File, Edit, and Preferences. Now the folks behind Ubuntu Linux want to get rid of menus… or at least supplement them with something that may be easier to use and take up less screen space. 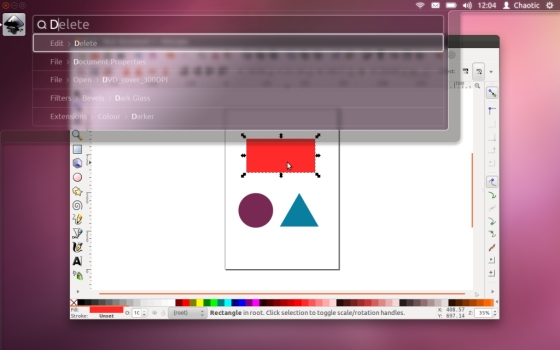 Founder Mark Shuttleworth says Canonical is testing something called Head-Up Display (HUD) which could be ready to go by the time Ubuntu 12.04 is released in April.

The idea is that apps which support the system wouldn’t need to display the File, Edit, and other menu options at all. Instead you would invoke the HUD and just start typing. The Ubuntu HUD would search through all the possible commands to find the action you’re looking for. Like Google search results, HUD will also recommend options as you type so you can refine your results.

For example, say you’re using a web browser. You can search for bookmarks or visit sites from your history just by starting to type their names. Want to bookmark a new page? Just start typing “bookmark.” Want to visit your settings or preferences page? Start typing “settings.”

HUD can also look through the help files to understand if settings and preferences are related, so you can start typing one and see the results for the other.

Here’s why this is a good idea:

But here’s why HUD may also be a bad idea:

Shuttleworth says the first public version of HUD won’t entirely replaces old-fashioned menus. You’ll be able to enable them if you want them. Canonical is also working on a way to replace the “roadmap” function that menus currently serve. The developers also plan to incorporate touch and voice input support.

In other words, Canonical is well aware of some of the potential downsides. But while the Ubuntu Unity user interface has gotten a fair share of criticism over the past few years for being too radical a departure from traditional desktop environments (or for dumbing down the user interface), one thing you can’t accuse Canonical of is thinking small.

Shuttleworth compares the HUD menu design with Microsoft’s Ribbon UI. Both are designed to make menus easier to use by giving you quick access to the features you need most. But Microsoft’s solution does this by throwing a ton of information you probably don’t need at you while taking up screen space. The Ubuntu HUD solution does the exact opposite, by eliminating visual menus altogether and only bringing up navigation tools when you need them.

Canonical is currently testing HUD with the goal of shipping at least an early version of the feature with Ubuntu 12.04, but there’s a chance it may not be ready in time, in which case HUD will likely ship with Ubuntu 12.10 in October.

If you want to test an early build you can download Ubuntu 12.04 Alpha, add the unity-team repository, and install the test build of HUD. Web Upd8 has instructions.